What is the most famous aircraft in aviation history? Many people will say ‘the Spitfire’. And who would not want to fly himself in a Spitfire?!… start for this moment with this Spitfire manual from Dilip Sarkar!

Dilip Sarkar has been a Spitfire fanatic for many years and the energy which thus arose is converted into numerous books on the Spitfire and the role which this aircraft played in the second world war. He has interviewed numerous pilots who flew this type and wrote down all their memories, stories, descriptions included in his books. Similarly, in this book; ‘Spitfire Manual’!

The book consists of nine chapters including the introduction. The intruduction is actually the most interesting part to read. It describes how the Spitfire -over time and especially in the war- was developed to compete with the German planes. The Spitfire at that time was made out of a revolutionary fuselage design and consisted of three parts (engine compartment, center fuselage and detachable tail). Eventually there are a total of 20.334 Spitfires built in 24 variants. Additionally, there was also the Seafire variant, of which nearly 2.600 were built. Incredible numbers. The Spitfire was designed by Mitchell who has sadly died of cancer in 1937. 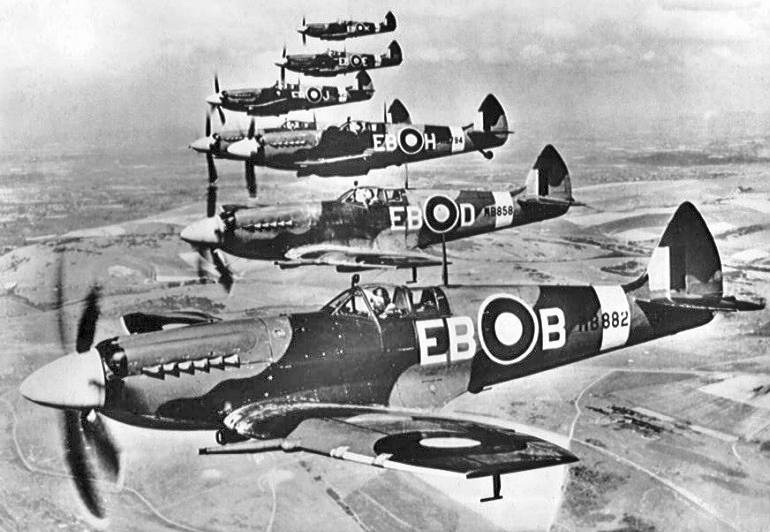 Chapter 2 “Pilot notes’ consists of a overview of all the buttons, levers and functionalities in the cockpit with a description of how it works. When I read this chapter, I was looking forward to sitting down in a real cockpit and wanted to use all the buttons! Dilip Sarkar uses here, and also in various other chapters, the original documents from the fouties, typed with typewriters. That makes reading and viewing this book even more interesting. The cockpit of an average small plane is a bit simpler!

Chapter 3 shows different ‘ combat reports’. Some of these reports describe very detailed where, at what height, how fast and in what direction pilots was flying towards the enemy. They show how the air battles went and how many planes were destroyed. … planes of the Germans but also of the RAF.
The chapters ‘Forget-me-nots for fighters’, ‘General notes on the Air Gunnery and air fighting’ and ‘Bag The Hun’ contain copies of (partly) humorous drawings with tips for the pilots. For example, if you need to jump, slide your window open, ‘(…, …) take hold of the parachute rip cord, and than either stand up on the seat and put the stick forward, or roll on to you back. Our old friends gravity and centrifugal force will have done the rest before you know they have started.’ Imagine!

Also explained in detail is how to estimate distances to other aircraft and how, when and under what angle you had to shoot and how to perform deflectionshots. Deflectionshots are shots you perform while you’re imagining the direction and heading in which the enemy is going to fly in the second after the shot. Extensively is also discussed the best way of approaching an enemy plane, the height and angle of attack. With this information fuel could be used efficiently and the hostile-plane could be actually approached in stead of losing it. The book is full of interesting details. Did you know that on the day of d-day, 14.000 (!) missions were flown by the allied forces and only 319 by the Germans? Did you know that the Spitfire flew its mission in 1957? And so I can just go on.

Let me end with the historic statement of Churchill who was Prime Minister at those times; ‘Never in the field of human conflict was so much owed by so many to so few’. With this statement he referred to the pilots of the British Fighter Command, the British fighter pilots and pilots from other nationalities. Homage to the Spitfire-pilots who risked their lives for us!