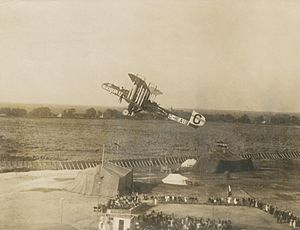 Ever heard of this exhibition?! I had not! …. What you will first notice about this book is that it is relatively large. It is printed in A4 size and of excellent quality. When I opened it for the first time I noticed that it was written in a very detail oriented manner and that it includes many photos of the participating airplanes and the pilots, as well as posters that were used to advertise this First Aviation Exhibition Amsterdam (ELTA ) in 1919. It is a solid and attractive book.

In my opinion, the book tells of a wonderful exhibition that was held soon after the First World War ended. I find it amazing that a such a major exhibition of so many aircraft could be held in a country that had remained neutral in the first world war, and despite the fact that Europe lay in ruins. The airplane developed quickly as the demands of the war required and these developments were shown to the general public in – yes! – Amsterdam. When I was young I went to Le Bourget in Paris several times and recognized a very mundane atmosphere that lives on in present day airshows. Rob Mulder has succeeded in letting this book breathe this beautiful atmosphere through all of its pages.

I write ‘mundane’ but in reality it was in particular a European affair with more than 80% of its participants from the Netherlands and about 20% from the United Kingdom, France and Italy. You can guess why so few European countries were represented. Miscellaneous aviation related items were exhibited, from fire extinguishers to parachutes, from propellers to tires and -of course- from phones to aircraft.

Rob Mulder has written this book in 3 sections. Chapter 1 contains 36 paragraphs, which tell the story of the ins and outs of the exhibition. He explains the organization behind the ELTA, the participants, about the planes that were there, the equipment and contributions by country, the visit of Queen Emma, the KLM and much more. Perhaps it was possible to structure it a bit more but alas! All in all, it was good and interesting to read about these aviation stories from the old days. Chapter 2 describes the participating aircraft with significant details such as history, engine information, weight, dimensions and on board crew members. Chapter 3 presents those people who played an important part and –according to the writer- there were quite a few! ELTA chairmen, directors, committee members and pilots are discussed. Unfortunately I could find that none of my ancestors had participated in this event. Photographs of the pilots were included if available. At the conclusion of these chapters there is a section of appropriate photographs and drawings. I especially find the numerous photographs worth viewing.

Rob Mulder presents a highly detailed and richly illustrated book about a relatively unknown piece of Dutch aviation history. The 2 years he worked on this book were well spent!