It was last year when I walked at Schiphol Airport on a early morning looking for a newspaper. If you can only buy the Dutch Telegraph that is not really a choice I thought. At that moment my eye fell on an English book with a picture of a Vulcan-aircraft on the front ; Җulcan 607Ү Visually oriented as I am I had to buy that book! The “Vulcan” is a nuclear bomber that was designed in the 50s. 136 Vulcans were produced to perform nuclear attacks in the Eastern bloc. For me itӳ a plane from the good үld daysҬ when they designed really beautiful airplanes. The Vulcan had a narrow flightdeck on which the crew was packed. It was a space that was once very secret.

Rowland White describes in an interesting way how the pilots had to prepare for a unique mission in a very very short time and at the very last moment in May 1982 in the Falklands conflict between Britain and Argentina. The pilots trained a lot on how to refuel from Victor tanker aircraft in the sky during the night and day. This was not done and practiced with the Vulcans for decades! I was crazier; the Vulcan never flew missions in war until that time and the Vulcans had three months to go before the RAF would take them out of service from RAF Waddington! While practicing the procedures for air to air refuelling, the ҰrobesҠwhich they used for fillig up the fuel tanks sometimes broke. In these situations lots of kerosene flew over the cockpitwindows and went into the air intakes so that the engines stopped. Imagine that! I sometimes stop the engine of my motorglider but these moments are planed and I am very aware of stopping it at these moments!

Vulcan crews were preparing for the missions to the Falkland Islands together with the crews of Victor tankers. They would fly to Ascension Island -west of Africa- and from there they had to fly the the longest mission ever over a distance of 4000NM or 7.412km! And that was one way! Rowland White describes extensively how 11 Victor tankers were needed for only one mission, including all the logistics around it to make it all possible. He focuses in particular on Captain Martin Withers and his team and how this team executed the preparation and missions.

Operation ‘Black Buck’ should ensure that the runway at Stanley was damaged so that the Argentines could not fly from this airport. To achieve this goal it was calculated that flying towards the runway at an angle of 35 degrees would result in the best change to hit it with 10.000kg of bombs. IӬl say not to much about the results of the several missions, otherwise I would tell to much!

For the pilots among us it is a book in which many known issues are dealt with we employ in general aviation during our flight planning, like fuel-, RT-, navigation-issues, etc. How to interfere with ground- to- air- weapon systems is of course not our thing, but if you read it all, you would have chosen to experience it live! Thrilling at some moments! 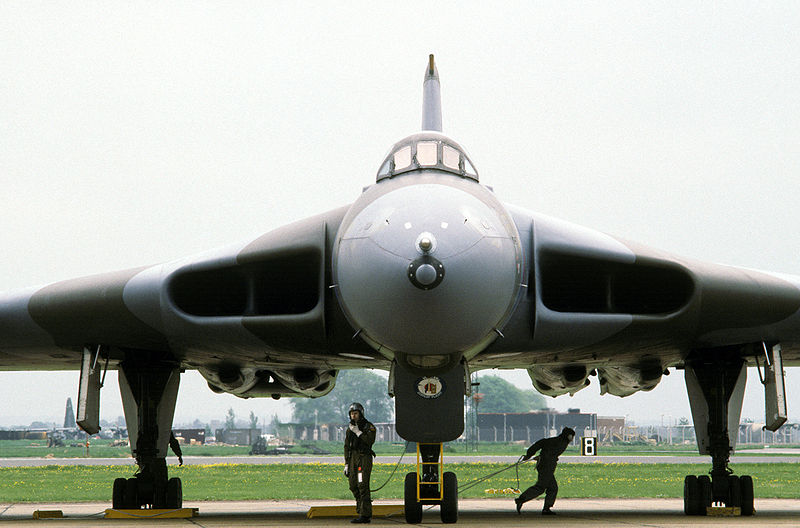 The book contains interesting pictures, different maps, a cross-cut-drawing of a Vulcan and a diagram showing how the complex refuelling procedure was done. The author writes smoothly and the book has never bored me, in fact, I read it in one sitting! The writer combines the vulcan-part of the war with lots of other interesting facts about the Falkland warŮ Eventually, the Vulcan retired in March 1984, 2 years after being deployed in a ‘hot’ situation.

Very soon I am going to write a review on the book “Sea Harrier over the Falklands’, written by Commander ‘Sharkey’ Ward. This book describes the ins and outs during the Falklands war as seen through the eyes of a Squadron commander and Harrier pilot of the Navy. ‘Sharkey’ had a very clear opinion about the missions of the Vulcans! It places the vulcan-missions in a different perspective. To be continued!

Want to see more about the ‘mighty’ Vulcan? Go to www.youttube.com and type “Vulcan bomber. The English wiki provides an interesting site about the Vulcan, http://en.wikipedia.org/wiki/Vulcan_bomber . There is also a club in the United Kingdom whose purpose it is to keep the last remaining Vulcan (the XH558) flying, see http://www.vulcantothesky.org/ . You can join the club and you get a few good books and a “pin” of a Vulcan.