Again, a great edition out of the Harpia Publishing series, this time about the Taiwanese Aviation.

When you look at the map, then Taiwan is a small dot next to extremely huge China, which considers Taiwan for years now as a disloyal province. This year the tension between China and Taiwan has increased through, amongst other things, the elections in China and then what?! What can Taiwan do against the huge China that in terms of military power is so many times bigger. The strategy of Taiwan – so I read left and right on the internet- is particularly aimed at damaging China and making it as hard as possible for the Chinese, if they want to take over Taiwan. A sort of David and Goliath affair.

This beautiful compact book describes the Taiwanese aviation in 5 chapters and some appendixes. The built up is in line with the other books out of this series that we know from Harpia 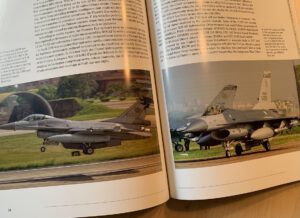 Publishing. The aviation of Taiwan exists since the end of 1920. After WOII and from the originating of ‘The Republic of China’ (I continue to find that an odd name for a country that wants nothing to do with China!) In 1950, the United States primarily helped Taiwan with building up an armed force. So, the Taiwanese ‘received’ throughout the years F-86 Thunder jets, F100 Super Sabres, F-104 Starfighters, F-5 Freedom Fighters and some other Western planes like the French Mirage 2000.

What I than find immediately an interesting detail from the book is that the costs per flying hour of the Mirage with 28.500 USD is many times higher than the costs for a round with a

F-16 (5.700 USD). The Mirages turned out to have a lot of troubles with corrosion caused by the high humidity and pollution in the area in which they were stationed. Extraordinary is also the by the Taiwanese themselves produced AIDC F-CK-1C/D Ching-kuo, that emerged from the nineties.

The book is much more than a sum up of airplane related information. Also attacking scenarios of the Chinese and defending tactics of the Taiwanese are described. It will become a difficult story for the Taiwanese in terms of numbers of planes, with around 300 jet fighters against the 4000 planes of China.. We will have to wait and see. Perhaps that also the ground forces and the navy have some interesting tactics to stand up against the Chinese a bit longer. In between the lines I read that you cannot organize against the Chinese.

Language wise the authors have made it a good readable book with pictures that make it all well comprehensible. Some very good maps are in it too. All in all a certainly interesting book to get to know a bit more about the Taiwanese aviation  and I will add it happily to the rest of my Harpia collection.