The life of Terry Parsons

A great book is this from Melody Foreman, which takes you into the life from Terry Parsons who spent a great part of his life at digging up remains from planes that have crashed during the Battle of Britain (10 July – 31 October 1940) and The Blitz (7 September 1940 – 11 May 1941). The book starts with a small introduction of how the excavation planes must be seen in terms of historical value. In fact, these are a search and excavation of stories, of techniques from then, of people, of tragic, of military operations, of much much more and it every now and then ensures that the family of the excavated victims, can close a chapter with lots of insecurities. How valuable! A small piece of relevant legislation is set out, that is applicable to the excavation of remains. Of course, this legislation needs to be there, because just digging and then finding human remains -which is forbidden- then just closing the ditch, is not very neat. It all has happened of course. After the introduction, Foreman describes how ‘Aviation archeology’ started after WO-I with the excavation of biplanes from the past and developed into the excavation from the planes of WO-II. Difficult business also comes around, as: who becomes the owner of the material things that are dug up? And how is this with human remains? Etc.

A lot of excavations

After that the book tells about Terry Parsons and his many excavations, which he obviously did with a team. Foreman takes you along different ‘projects’ and places them in the context of all kinds 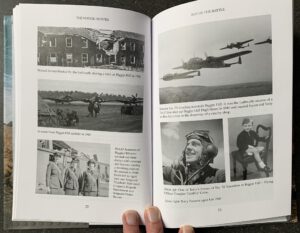 of interesting side info. This is information about the operations of that time; personal letters and info about pilots or from people that were eye witnesses; information about technique; about the lives of the often young pilots; about the locations where they crashed. Take for example a tree in East Kent were the plane of pilot Black crashed into with a speed of about 450 Mph, burning and all. He managed to escape just before that with his parachute. Unfortunately, Black was heavily burned and passed away a month later in the company of his loved one. What I also found interesting to read is that attention is given to the non-English that flew and crashed. It was not all English men that flew against the Germans, but also pilots from Poland, Canada, South-Africa, Australia and so on.

The Battle of Britain (BoB) tells – shortly said- about the air battles between mainly the English Spitfires and Hurricans and the German fighters as Messerschmitt Bf 109. At ‘The Blitz’ we mainly speak about the bombardment flights of the Germans to the English cities. During the BoB about 40.000 victims fell, from which around 35.000 civil victims (14.286 people killed, 20.325 people wounded and on the Military side for both Germany and the Allied, around 4.000 people died and 1.150 wounded. The Allied lost 1.744 planes, the Germans 1.977. During the Blitz about 40.000 till 43.000 civil victims and 46.000 till 139.000 wounded. 2 Million houses were destroyed. London alone had 60% of its houses destroyed. On German side an unknown number of victims fell, and 3.363 wounded, plus 2.265 planes were lost. All enormous numbers! (data from Wikipedia.org) 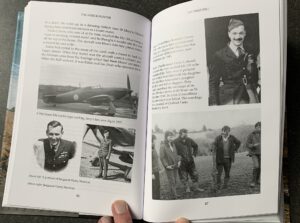 Each excavation has it’s own story

Foreman links the excavation from Parsons in an interesting manner to each other throughout the chapters and combines them and personal issues from Parsons with great information. The book is well readable and because it contains lots of various information, it has become an interesting history book. To start with about the excavations and everything that was connected to that and still is, but secondly also about Terry Parsons, who now is over his 80ies and can look back at an extraordinary life, in which he ensured for a lot of family members to put a line ‘under the story’. The book contains about 100 pictures which give even more color to the content. With all his excavations also came more attention for the personal stories, the drama and light on all of them who got wounded or sacrificed their lives in the name of their country. Let’s never forget that.

Melody Foreman has shown light on this special aspect with her book, ensuring that the war from then continues to be actual. Thank you for that!

Last but not least, I want to mention that – next to all those other thousands of books that have appeared about this period- there is one more great book to consider: ‘Men of the Battle of Britain’. Also published by Frontline Books. It tells about all the pilots that have taken part in the Battle of Britain, combined with interesting and relevant information. Certainly, worth the read!