The book tells about the genesis of the first attack helicopter. This was born out of necessity. Vietnam became soon too dangerous for unprotected helicopters

of the Air Cavalry. What becomes apparent in this book, is that from the early beginning of WO II and the by everyone known M.A.S.H. helicopter for transport of the wounded, thought was being given about how to arm this immature ‘battlefield vehicle’. Till the moment that small turbine engines became available, the profitable weight of helicopters was too little to give hands and feet to. The famous Bell OH-1 ‘HUEY’ did get such a turbine and with that was quick and agile enough to make the step from ‘medical’ to commit to combat troops…till the Vietcong discovered how to deal with the helicopters. The acute necessity for powerful reaction became evident. And that had to be delivered from close by. 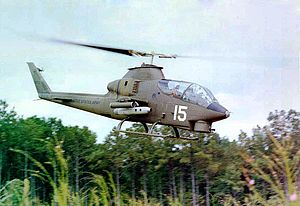 Jet fighters and even the Sky raider were simply too fast to be able to longer give support on site. Bell got the brainwave to design, on the basis of the airframe of the Huey, a ‘flying tank’: the COBRA was born. The multiple good pictures speak for themselves. The name ‘COBRA’ was also bulls’ eye for the future users. The attacking behaviour of that beast made exactly clear what the designers of this aircraft had in mind.

Without becoming too wordy, the genesis, from the first experiments with the arming of helicopters, is very readable revealed. Of course the life story of the COBRA is the main lead. From first VFR to finally all weather and even able to fly electricity cables to pieces.
For the amateur lovers of helicopters a very interesting and good readable book.

Also a glance forward is made; future battlefield scenarios were too much for the Cobra. That step could the Cobra airframe not make. Instead, Boeing designed the AH-64 Apache for it, which is well known in the Netherlands since the flying to pieces of high voltage cables without worth mentioning damage to the ‘offender’.