Many stories go around about the heroic air battles during World War II, but in this beautiful bounded book, that exist of 516 pages with a lot of great black and white pictures, specifically the air-war of the period 1941-1944 in the north-western part of Australian is described. And how! It describes every air battle in detail of the than there stationed first Fighter Wing, existing of 3 RAF squadrons namely the 54th, the 452nd and the 457th. The beginning of the book gives a view of the built up, organisation and composition of the squadrons and after that of the air battles that took place in the 2 years after establishment. These squadrons existed mainly of English and Australian aviators, who had enjoyed their training in England and, amongst others, had fought in the battle for England. Most of them, relatively, had not noted many hours in their logs In the beginning the squadrons were stationed at an airport near the city Darwin and later also at a few surrounding ports. The flew with the Spitfire type ‘VC tropical’, a design with an extra huge air cooler and suitable for high temperatures, which also could be used in the fights around the Mediterranean Sea. Because the air battles took place on such great height, the benefits of this design did not all came to show. 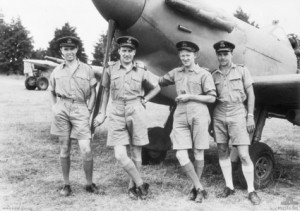 Extensive attention in this book is given to the attack tactics of the Japanese and the defending Spitfire squadrons. Each air battle is described very precisely, per squadron and per aviator and with each done manoeuvre of the Japanese and English/Australian aviators. You are actually sitting with the aviators in the cockpit and experience each air battle. This of course must have your attention… But you got it! It is really unbelievable were this writer must have got all this data from. The enclosed literature list is 28 pages! Very well documented.

A lot of things come to light that also related to the air war above England and which show that there are many bumps to the successes. The results were hugely influenced by factors as technical shortcomings at the planes and the used tactics to intercept the Japanese in the right way. The attack waves flew at a height between 25.000 and 30.000 feet. Only when the simple radar signalled the Japanese on time and when the Spitfires could reach that altitude in time, then there was a chance for a successful interception. But also than it often went wrong; falling tactics, miss-interpretations of the battle leaders and disorder on the Spitfires lead at the beginning to bad results. Often the Hispano canons of the planes did not work, but also ‘over speeding’ of the propellers often appeared. By over speeding the engines lose their power, get stuck or the engine gets damaged. In the described period 22 Spitfires got shot and 6 written off because the described disorders lead to a crash and in total 28 Japanese planes were shot. A ratio of 1:1 was not unusual compared with the European theatre in the first war years. 14 airmen at Australian and English side were killed in the battles.

For the fan who loves details this is a great book. With 516 pages you really get worth your money. The book gives a very realistic view on the down side of air war in general and specifically of those 2 years in Australia.