After reading the first two chapters of Philip Kaplan’s book about Pearl Harbour and the development of the early aircraft carriers he is the one to blame for my continuous hunt of YouTube clips about the ‘War in the Pacific’. I watched 15 clips of 45 minutes in line and was totally addicted. Notwithstanding the interesting subject I realized how little I actually knew of the war at this point at the other end of the globe. These first chapters feed my curiosity and greed. Reading the book in addition to those clips I watched I became aware of the passion Kaplan has about aviation and warfare during WWII. This volume is but one of many others he published.

Why is it that WWII keeps us so interested? Nowadays warfare is too sophisticated. Invisible to radar the modern weapon systems are up to the hardest job: 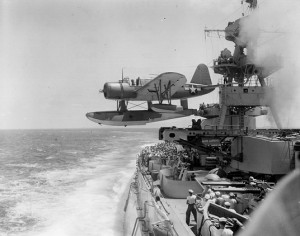 equipped for day and night use over remote distances a fighter is able to target and destroy within accuracy limits of an inch though never to be seen or discovered. Dogfights are rare and unnecessary because you’ll hardly ever see your enemy. Let us hop on Kaplan’s time machine that takes us back seventy years ago, to the early carriers and their whereabouts. Philip Kaplan shows us this world and time with interesting details of history, reports of eye witnesses and wonderfully illustrated black and white material.

This world describes real people who handled their gear without computer aid or other intelligence than their own. Warriors starting their dangerous mission by taking off at primitive carriers barely equipped. Taking off to fight an air war where the only rule is to take an eye for an eye. It must have been incredibly exciting apart from incredibly dangerous to survive four long years playing hide and seek amidst large war vessels, sub marines and enemy fighters in the air. By the way, did you know that gun fire coming from Japanese vessels had distinct colour tracers depending from which vessel it was fired? Japanese marine had found a clever way to follow their American aim in the air. Certainly it must have been a colourful but frightening event to them. 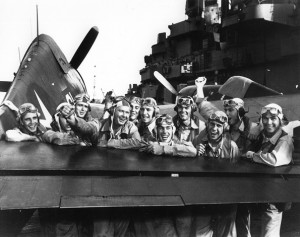 The book carries you away to the activities of the American naval forces describing the war in the Pacific especially from the point of view of carrier personal. Every now and then it takes a side kick to other allied forces and other naval conflicts too such as the Korean war and the Falkland war. Personally, I was really impressed with the report of Lieutenant Commander Morris Montgomery. He paints us his memories about the sinking of the USS Gambier Bay, one of those early escort carriers and the only one ever to have been destroyed by shells instead of torpedo’s. Very appealing also are details of the training of Japanese fighters, heavily trained and brainwashed under extremely harsh conditions. There is also a funny little story about a Dutch nurse. Traveling aboard a Douglas c-47 she happened to wave to the Japanese fighter they encountered. Mr. Sakai decided not to shoot the plane down!

Kaplan’s book is really accessible and eloquent. It lets the reader become acquainted with the early carriers and their development, their significance in warfare in general and their value during the course of WWII. Being a sibling of parents who suffered from German occupation, my interest in and reading about WWII has made me well aware of how important navy aviation and aircraft carriers have been to finally win this war. In my opinion we should be grateful to the allied lands to a really great extent. If not for their determination and valiance this review would have been probably written in a different language than Dutch or English… But I stray; back to the book.

Written in an agitated world, where nobody seems to have time for reading anymore and information flows from multimedia into our visual aided minds, Kaplan has succeeded in delivering a book which lets you encounter both the world of aircraft carriers as well as the historical course of the war in that area. Eye witness reports as well as the many stills and the easy to read font that is used contribute highly to the ease of reading. Exact and detailed technical information although not hard to understand and a nice portion of aviation jargon is to be found throughout the book. Exiting to read to both the aircraft fanatic as well as the historian this book turned out to be a page turner.

Photos posted with permission of the writer.