70 years after the event, the attack on the dams in the Ruhr area still speaks till the imagination. In 216 pages the writer tells how the new formed 617-squadron under the command of Guy Gibson is trained to try to bring the war to an end, with a specific for this purpose developed ‘bounce’-bomb.

On the evening of 16 May 194, just after 21 hrs., the first of the 19 Lancaster Bombers goes into the air with each 7 crewmembers and one extremely heavy bomb, that had to be thrown off at a very low height, barely 20 metres. Flying that low with a heavy airplane is rather risky and it is therefore also not strange that the Lancaster ED936-H with at the controls Geoff Rice, above the former Southern Sea hits the water, loses his bomb and a part of the bottom of the plane and has to return undone to the base Scampton in Great Britain. 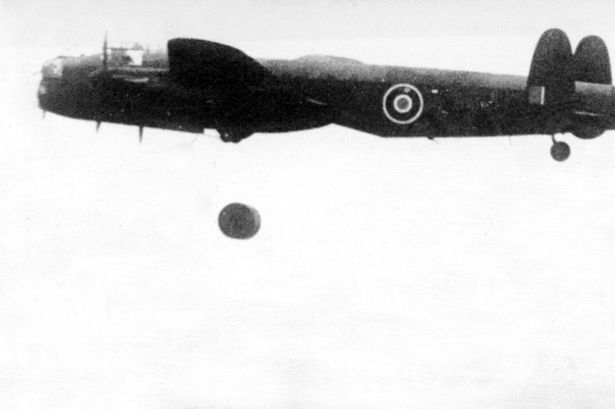 and smell he leather and the oil. You will read how the dog ‘Nigger’ of the squadron leader comes to his end and is buried. Yes, even the names of the ladies that bake the bacon and eggs in the morning for the crewmembers. The Moehne dam, the Eder dam and the Sorpe dam are threated, in a moonlight night, to a piece of their own, and do not hold. The water violently streams into the valleys and puts down the war industry of the Nazi’s for the largest part. But it costs a lot; from the 19 Lancaster’s 8 do not come back. 56 young men do not return. Of those 56 young men only 3 men are taken as prisoners of war. The other ones do not make it. Different bombers are taken out by heavy anti-aircraft artillery at the dams, but other’s fly against high-voltage cables and crash.

The Lancaster ED865-S from Lewis Burpee is hit by FLAK and crashes at 01.53 on the, by the Germans overtaken, base Gilze-Rijn in The Netherlands. The exploding bomb causes so much damage that the established night jets have to stay on the ground for quite some time. Guy Gibson returns to the base and hardly flies anymore after the incident. He makes a promotion tour through America. When he crawls into the cockpit of a Mosquito after more than a year, he crashes on the 19th of September 1944 at Steenbergen. His story is his evergreen; published after his death and also translated into Dutch (‘Tussen zoeklicht en afweervuur’- Enemy coast ahead’). Also the movie ‘The Dam Busters’, shall not be unknown. The book is divided into 14 chapters, the dams, the target, the preparations, the rising of the 617-squadron, the briefing, target 1 the Moehne dam, target 2 and 3, the Eder- and the Sorpe dam, the result, not returned, the dams after the attach, after the war, was it a success? And finally a day by Bomber Command. After that an appendix follows with all data of the airplanes and an appendix with the names of the men who are honoured on the 22nd of June 1943 by the Queen mother. 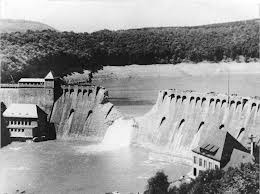 A very readable book with a lot of details for the amateurs. To close off, it is rather fun to know that the ‘inventor’ of the bomb also designed Great Britain’s best airplane the R100 and Guy Gibson was operated on a boil. The writer (with more than 10 books on his name) has done a lot of research, which has brought above quit some things. A less positive point is that they have

been rather sloppy with the non-English names. Den Heider stood for Den Helder and Gilze-Rijen was Giklze-Reijen. But a mope who pays attention to that! I have ordered, the from 1955 dated, movie ‘The Dam Busters’ on DVD…