Many people might still recall the events of 13 October 1972, when a Fairchild F-227 of the Uruguayan air force crashed in the Andes with 45 people on board. The plane was 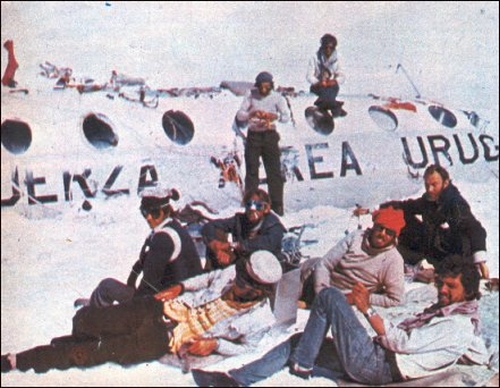 carrying the members of a Uruguayan amateur rugby team along with some of their family members and friends, and it was bound for Santiago in Chili where the players were due to play in a series of matches. But the pilot made an error in calculating his position and started his descent too soon. The plane flew into the side of a mountain. The wreckage of the cabin containing the dead, wounded and survivors came to rest at an altitude of 3450 meters.

So begins a book which is anything but a light read. It is not about flying and passion for aviation. Rather it is a story of a dogged determination to survive against all the odds. It is a behavioral analysis of the dynamics at play in the group of survivors, and the part played by their religion. The book contains an extraordinary number of details as to how one can and must survive when there is no food available.

Very soon after the crash it becomes clear to the group of survivors that they will not be found, despite the different searches that are surely being carried out. They are therefore forced to decide how they are to assure their survival. After much discussion, they agree there is nothing for it but to resort to eating strips of flesh from the dead. As there are quite a few dead bodies already lying frozen in the snow, they surmise their supply would be sufficient until they could be rescued. The survivors then have to endure yet more trauma when two avalanches claim a few more lives.

Throughout the book we are privy to the survivor’s discussions and decisions, we learn who the natural leaders are and we witness the struggles and conflicts they encounter. At times it helps if you have a strong stomach because we are not just talking strips of meat here. The survivors’ ordeal lasted 10 weeks. A relatively large group of passengers survived.

The book was written in 1973 by Piers Paul Read and first published in 1974. Read had researched the book thoroughly beforehand and had interviewed all the 16 survivors and their families at length. The book has since been translated into many different languages and I read the Dutch version. The language used strikes me as being a little dated (after all, the events do date back 40 years), but it is not clear to me whether this is because it is the language actually used in 1973 or whether it is more because there is a weighty religious thread winding through the book – a religious thread with which the fabric of ethics the survivors strove to live by in their darkest hour was woven.

The 2 maps at the front of the book could have been more informative. Apart from that the book is well worth reading and gives a many-layered insight into the situation (the survivors, family, rescuers, etc).

A film was also made of the story. You can find it on YouTube. In search type in “I Am Alive: Surviving The Andes Plane Crash”.