There is a magnificent Hawker Typhoon on the cover of this particular comic strip, and that’s why I bought it. The book is an instructive one due to its many beautiful

drawings coupled with the stories in the speech balloons. Operation Overlord is the complex campaign that heralded the liberation of Europe and eventually led to the end of WW2.

The book starts with Spitfires in Normandy shooting at German forces. These Spitfire attacks, along with a program of bombings in Normandy and Calais and several feints of army units elsewhere in Europe, were part of the ‘preliminary bombardment’ (idea borrowed from Napoleon?!). These ‘preliminaries’ formed in actual fact the ground-laying strategies of Operation Overlord: the landing in Normandy of a vast number of troops, particularly from the US, UK and Canada. Meanwhile the French Resistance was also doing its bit by carrying out various acts of sabotage in France aimed at damaging German communications as much as possible.

The book starts in the UK, and shows very niftily and in chronological order, what was happening during all these preparations, what decisions were taken, what the dilemmas were during the decision making process, who the main leaders were of the allied and German forces and of course all the highlights of the operation. The primary objective was to conquer the coastal areas and safeguard them, and then to build an artificial harbor at Arromanches. 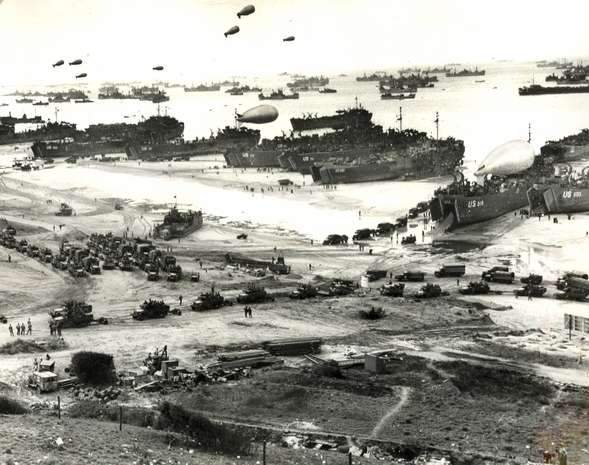 Never before had I delved so deeply into this whole operation. Of course I knew the basic facts about D-Day, but it was only during my recent visit to Normandy (for which I had prepared by reading lots of books) that the true extent of Operation Overlord and its intricate enormity became apparent to me. Many parts of the artificial harbor at Arromanches are still visible on the beach and in the water and there are many museums and war cemeteries on the coast and inland from the famous Utah, Omaha, Gold, Juno and Sword beaches.

The book is published in three languages (English, French and Dutch) and clearly shows the role of huge numbers of aircraft in this operation; more than 1000 bombers, more than 1000 planes with paratroopers, many large gliders and manifold fighter planes had a role in this unique operation. Throughout the book the role of the Hawker Typhoon is emphasized. This fighter plane- in which it was very dangerous to fly- became available in 1944 and was stronger and faster than any of the German fighter planes. The aircraft played a crucial role during the first weeks of Operation Overlord. Many Typhoons were shot down during the many missions, which were flown by the English, for the most part. Often, the aircraft suffered from technical problems or fires that broke out during the ignition stage. It is therefore not surprising there is only one Typhoon in full working order in existence today. A full scale copy of the aircraft can be found in the Memorial Museum in Caen. An interesting documentary of the Hawker Typhoon is also available via http://www.youtube.com/watch?v=qexMo-2ZLos. I can also recommend Wikipedia’s comprehensive contribution on Operation Overlord.