Yes! Here is another book of one of the most beautiful series that I collect! This time ‘Cuban Migs’ -and for the people that do not know the books of Harpia Publishing-; a great book that is part of a large series of books that, in the meantime, is published by them.

The book is written based on various sources, European and American ones, but especially Cuban sources. The history of the Military aviation in Cuba started in 1913 (!) with the introduction of a ‘Curtiss F flying 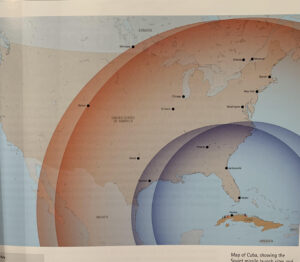 boat’ The two gentlemen that flew the airplane from Key West to Cuba, became the first two flight instructors. After that another 9 biplanes were delivered, of which 3 got damaged during the transport. Yes, that is also possible! In 1919 the Cuban Army Aviation Corps officially commenced; the official start of the Cuban Military aviation!…

The book is -just like all the other books of this series- built up logically; bit of history, the introduction of the MIG in aviation, other types of MIG’s, the crises in which Cuba and her aviation had their part, foreign wars and what happened in and after the period that the Soviet Union fell apart. This all very well documented and with numerous sources, but still not to comprehensive and actually only interesting facts. I found it, for example, exciting to read in which countries the Cuban aviation had roles in conflicts, such as in Portuguese Guinea and Syria in 1973 and 1974, in South Yemen in the years 1973 till 1976, Angola from 1975 till 1991. All briefly described, but also shown with a stirring chart that shows which Angolan helicopters, MIG’s and other planes crashed from 1978 till 1990 with Cuban crews! Angola fought a conflict in those years with South America and Cuba got involved in this. Also assists in Ethiopia and Nicaragua come past. This way the aviation still had a rich history.

This was apart from the conflicts and treats that played between Cuba, the Russians and Americans. Also, intriguing are the short descriptions of crews that already in the years from 1958 till 1993 tried to fled the country. Flying to Key West in Florida is a distance of 144km and with a jet that was possible in about 10 minutes. The United Stated were thus often target in that respect! 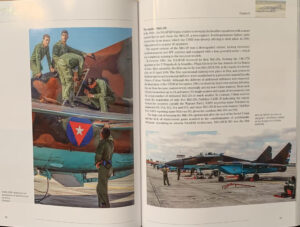 The book also contains various records with MIG’s and for example, their current location in musea or airbase, lists of squadrons and types of planes for the Western, Central and Eastern zone. Furthermore, good maps and hundreds of photos of good quality in black and white but mainly colour.

At the end of the book a whole appendix is designed to types of MIG’s that flew with their specific markings, technical details and numbers in service with registration numbers. The book actually shows that the aviation with respect to the aviation in other countries does not represent much, but that there is still an interesting and huge history behind this aviation and altogether the country Cuba. The texts are very good to read, like in all the books of this series.

Again, a more then good publication in this series!