Up with the best of the best

I already had read a book of Dave ‘Bio’ Baranek (further referred to as ‘Bio’) and also this book ‘Tomcat Rio’ is a real great one! A book about the life in and between Tomcats, which I would have loved to have lived myself, but my life obviously ended up differently. When I was 15 years old, the movie ‘Top Gun’ was out and made my hunger for flying only bigger. The F-14 -or any other jetfighter- I would unfortunately never fly for real. And, what I hadn’t expected back then, was that I, many years later, would read books of one of the people that had cooperated in the Top Gun movie and who just flew those jets: Dave “Bio” Baranek!

Top Gun and after

Bio describes in this book ‘Tomcat Rio’ his life at the Navy, with an emphasis on the years at the Tomcat squadrons after his Top Gun time. Because his eyesight impaired at the end of his puberty, he couldn’t 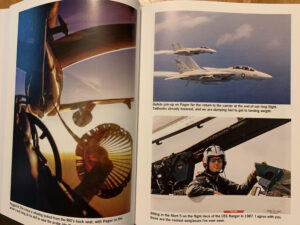 become a pilot and hence he became a RIO in the end. Yes RIO! RIO means Radar Intercept Officer. The man in the back who does the radar and important weaponry related tasks.

The book starts with the transition to a Tomcat squadron from Top Gun, where he was an instructor. Back in the world where he had been before his Top Gun time. Reading the book, you step into a Tomcat right-o-way and engage in a trainings mission with an AIM-54A Phoenix Rocket for air-to-air targets. A flying target had to be found and taken out. Of course, that was successful, but interestingly is that he takes you along all details that are of importance; the radio communication, de distances, the times, the speeds, through all of which you really feel like you are in the plane.

Next to that BIO describes how he went from a training squadron to the Fighter squadron VF-2 ‘Bounty Hunters’. He sets out how he prepared with his squadron to be a few months at sea and eventually also set out, far away from motherland. Everything is listed. The routines at deck, the food, the flying, the waiting, the stand-by modus at deck in surroundings where a high alert was on, the colleagues, the preparation of flight missions… the power of the Tomcat, his technique, agility, the jokes, the tension, the proportion on board, the movement of ships, to be short, everything what each boy of that time would have loved to do… 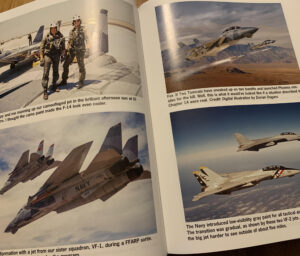 Of course, it was the time of the Cold War between East and West and it wasn’t just ‘fun’. Also, in Iran it became restless which resulted in more concrete missions in ’87 in the Street of Hormuz. Bio flew all kinds of missions; with other jets but also together with P3 Orion planes, which explored but also needed to be secured. Bio takes you along ‘live’ in all missions in his Tomcat years. And this is how the book Tomcat Rio continues!!! Just interesting and captivating. Therefore, I would have loved to have read this book when I was 15, but then everything was pretty ‘secret’.
In the end Bio had a great carrier of 20 years within the Navy, in which he eventually ended up as commanding officer of VF-211, a Tomcat squadron. In total he flew just under 2500 hours in the Tomcat and made 688 touch downs on an aircraft carrier. That really is pretty much! With this book he describes in a fine way his experiences within the Tomcat squadrons.

I find this book Tomcat Rio very accessible through its size, the two columns of good readable text for the chapters and the interesting Intel Briefs about all kinds of issues like, ‘callsignes’ code words for switching to the ‘secret’ frequency of the squadron; a comparison between missiles (pretty interesting!); how it works with the calculation of the needed kerosine, and more interesting side information. The side information tells all kinds about the details of the Navy, the planes, the missions and the people that operated the planes. The book contains also two sections with color photos; about 60 in total, which almost all have been made by the author. The publisher Skyhorse Publishing delivered a beautiful product, which you also really want to have in your hands to read. That only leaves room for 1 rating, namely this!