Two reviews in one on Chinese warplanes and Army Aviation! I previously was already enthusiastic about the books of Andreas Rupprecht, published by Harpia Publishing, and also now I have to really say that I have two great new books on my bookshelf.

The Air force book is with 240 pages slightly thicker than the Army book, which counts 95 pages. Both books are printed on beautiful glossy paper. 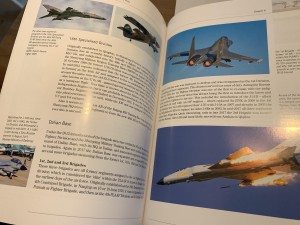 Earlier we have seen the ‘Chinese Naval Aviation’ book (and also reviewed, by the way) and these two books are actually the ‘successors’ (my word) of the naval book. With the quality paper and print you have a bit more weight and therefore you really have books in your hands.

Andreas follows the aviation developments in China already for years and I think that some NAVO-partners, but also other defence organisations of countries around China, buy his books. Whatever it is, his books contain tons of good information and beautiful clear pictures. There are a lot of pictures in the books that are made by the Chinese defence themselves, but also a lot of picture material of private persons and for panels.

Both books start with a chapter with general information and history, and after that a chapter about the used abbreviations and an appendix about the squadron-emblems. This all makes it very clear to read. It is complimented with the transparent overviews of the different ‘Commands’, ‘Army groups’, ‘Brigades’, etc. and great maps. Next both books set out about the used types of airplanes, helicopters and UAV’s. Followed up by a chapter with information about armament, a chapter about the steps in the education of the pilots and finally a closing chapter about the way in which the parts with their planes/helicopters and others means, are spread about the Eastern, Southern, Western en Northern Commands. 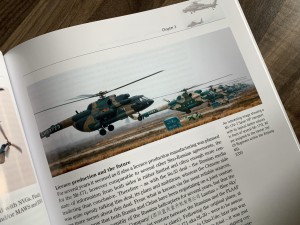 The Army Aviation book is filled with short but powerful information about the around 1000 helicopters that the PLA (People’s Liberation Army) has and other planes. All in all it turns out that still a lot has to be improved, especially the capacity of the helicopters. In resemblance with the US Army that has around 3500 helicopters – with also more capacity- Chinas has to improve quite a bit, tells Andreas.

Also the Air Force book contains very good readable information and what I found particularly interesting is the turnover of China from very closed – and hardly giving plane pictures free – to a lot more ‘open about defence communicating country’ Well, the author makes here some ‘meta reflections’ about that not all information spread by the Chinese government must be trusted and that the Chinese actually also display information differently. But whatever it is; if you put all the pictures and information together that the author has collected from the various resources, than surely something must be true from all the information in the books!

He also describes where the squadrons have derived from and it seems to me an enormous great puzzle there in China, but very nice that the author keeps track of it all for us! If we are curious about developments we must be at the Airbase Dingxin, by the way. Here they are testing new planes since the 50ies. Anyway, at all a gigantic result and task to deploy such an enormous country of an effective defence. You are simply never ‘out-implemented’ with new planes.

I have to really admit here that it needs getting used to all those new names and codes of jetfighters and planes. ‘Earlier’ in the cold-war era, it was

really quite easier to recognize and record. What there was, was not a lot and was called ‘MIG’ (or J5- built in license) or Antonov, but nowadays the arsenal is seemingly expanded and you will find next to build in license MIG’s, also variations that have been developed by China self. And now we are just talking about the hunters..

All in all it is interesting this time what Harpia published. Great work of Andreas Rupprecht. Curious for his next books!