THE FIRST NUCLEAR WAR. In 1973 I was 2 years old and that is exactly the reason why I didn’t know about this ‘war’. And then it is very nice that this book of Helion & Company crosses my path to change that! It is a book from the ‘Middle East & War-series’ of which Tom Cooper has written a few or has contributed to them. This edition he has written together with Abdallah Emran. 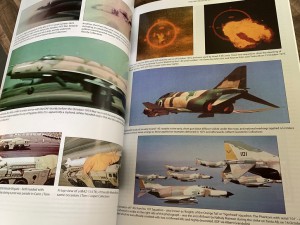 history. In October 1973 it must have been a tensed time there. The book tells about the war between Israel and Egypt on one hand and on the other hand with Syria in October 1973 in a special period: it was a time in which – according to sources-  Egypt, with support from the Russians, placed nuclear warheads on their Ground to Ground rockets and also flew with MIG’s, plus borrowed Mirages (from the Libyans). It was also a time in which Israel had already produced nuclear weapons with the nuclear reactor in Dimona, and those could be combined again with the by the Americans delivered brand new Phantoms. The 6-day war in 1967 was fresh in the memories of all sides. That was a war in which Israel cut short a threat from Syria and Egypt and took over the Sinai dessert and the Golan-heights. Egypt and Syria attacked Israel in October 1973 to take back those grounds. Israel was misled on forehand and had therefore not seen this war coming. At once the whole country needed to be mobilised. This is my highly shortened version of a lot more complex history from those years!

The authors zoom with this book especially in on the air war between Egypt and Israel and placed that in the context of the developments in those years. They argument with the help of various military sources why the Israeli were especially focussed on specific aviation bases and location of the Egyptians. Nevertheless, the rockets of the Egyptians had to be taken down! 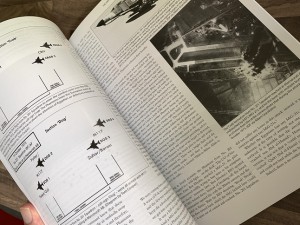 The air war in which both countries shortly got into.. especially the one from 14 October and for 53 minutes long, is set out in much detail and I found that very interesting. The story is that Egypt shot down about 15 till 20 hostile planes, while they were in disadvantage with their number of planes. Israeli sources tell hardly anything about this, because of this! The book describes very particular (also with the names of the pilots of the Israeli) how the attacks took place from Israel. Be aware that in the total war between the countries a lot more missions with planes were flown in North and South Israel and adjoining regions and that a lot of those missions also failed and planes from all sided were shot down.

The 80 pages thick A4-format book contains more than 100 pictures, a couple of maps and 18 colour side-views. The book is a good additions to the Middle East @ War series AND to my bookshelf. The wars in those regions seem, by the way, never ending, and thus it is most likely/unfortunately that the series will continue to infinity!