Huffman Prairie is an isolated, quiet place eight miles outside of Dayton, Ohio. The field takes its name from a banker named Torrance Huffman who owned the cow pasture at the time the Wright brothers flew the Wright Flyer III, the aircraft that proved that controlled flight was possible.

The field is vast. Wilbur and Orville Wright knew that they needed the space to test fly their aircraft and not crash into the honey locust trees 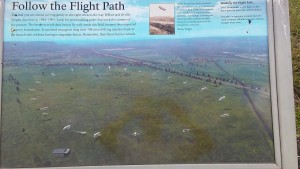 that surround the field. The brothers flew close to the ground, following the elliptical patternof the field. At the time, Huffman Prairie had cows and horses that the Wright brothers had to work around. The trees were a serious threat to the pioneer flyers, the cows and horses not so much, for Mr. Huffman allowed Wilbur and Orville to fly at Huffman Prairie on the condition that they didn’t bother the animals.Today Huffman Prairie is known as the place where the Wright brothers learned to control an airplane, not just fly in a straight line. The 84 acre field is now known as Huffman Prairie Flying Field and is designated a National Historic Landmark. The location of the field is significant because it was next to a rail line that enabled Wilbur and Orville easy travel from their home in Dayton. By 1910, the Wright Brothers had set up the Wright Company and their flying school at Huffman Prairie. 1916 was the last time that Orville used Huffman Prairie; Wilbur died in 1912.

Wilbur and Orville built a shed at Huffman Prairie that housed their most advanced aircraft at the time. This is also were they lived during the time it took them to become confident that they could control the machine. A replica of the shed exists today in Huffman Field.  Adjacent to the shed is the rail and catapult that helped launch the aircraft. While at Huffman Prairie, the Wright brothers endured inadequate living conditions, the heat of summer and mosquito infestation; this, in addition to the frustrating technical problems of flight that they undertook to solve. While at Huffman Prairie, during 1904 and 1905, the brothers made about 150 flights, which enabled them to develop the Wright Flyer III in 1905. 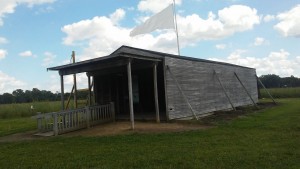 How We Invented the Airplane chronicles some of the difficulties that the birth of flight posed for anyone who was up to the challenge. The book was first published in 1953 and republished in 1988. The work is a compilation of papers that the Wright brothers wrote while they were learning the principles of aerodynamics. However, the book takes its title from a paper Orville Wright wrote in 1920 entitled “How We Invented the Airplane.” The paper was written in response to a 1920 legal action brought against the Wright brothers, even though Wilbur Wright had died eight years earlier. The paper was discovered after Orville’s death in 1948. The book contains 76 photographs that were taken by Wilbur and Orville. This attention-riveting book was edited by Fred C. Kelly, a friend of the Wright brothers, who wrote The Wright Brothers: A Biography and edited Miracle at Kitty Hawk: The Letters of Wilbur and Orville Wright.

Wilber and Orville were interested in machines. As young boys, they were fascinated by a toy helicopter they were given that was made by the Frenchman, Alphonse Pénaud. In 1892, they created the Wright Cycle Company. The brothers became interested in flying through the influence of the German engineer, Otto Lilienthal, who was the pioneer of glider flight. Lilienthal died in 1896, after crashing in a glider. His final words were: “sacrifices must be made.”

Initially, the Wright brothers followed Lilienthal’s lift calculations, but after concluding that these were inaccurate, they created their own wind-pressures tables. In a chapter entitled “The Wright Brothers’ Aëroplane,” the Wrights explain: “The standard for measurements of wind-pressures is the force produced by a current of air of one mile per hour velocity striking square against a plane of one square-foot area.” Their calculations enabled the Wrights to develop wings that created predictable lift: “Our tables made the designing of the wings an easy matter; and as screw-propellers are simply wings traveling in a spiral course, we anticipated no trouble from this source.” The Wright brothers were also influenced by Octave Chanute’s book Progress in Flying Machines and Samuel P. Langley’s Experiments in Aërodynamics.

In 1901 the Wright brothers built a wind tunnel in order to better understand how an airfoil reacts to wind. While their experiments with flight during 1901 were discouraging, the story of flight begins in earnest with the Wright 1902 glider. Wilbur and Orville Wright first flew on December 17, 1903, at Kitty Hawk, North Carolina.

After many glider flights, they installed an adjustable rudder. It was only after this fix that the brothers began thinking about the addition of an engine to their flying machine. According to Fred C. Kelly, the Wright brothers understood the basic principles of flight by the time they built their glider. The glider helped them understand the importance of balance and the use of ailerons and rudders, and the ratio of span to chord. They measured the surface area of wings from wingtip to wingtip (span wise) and from front to rear (chord). While the strong winds on the shore of North Carolina enabled them to fly the glider, it proved to be an obstacle to powered flight. The complex problem of turning an aircraft in flight was what the Wrights aimed to solve at Huffman Prairie.

By 1902, the Wright brothers had come to understand key principles of aerodynamics. While many scientists at the time scuffed at the idea of heavier-than-air flight, the Wright brothers persisted, where others became discouraged. They credited their father with developing their ingenuity and perseverance.

At Huffman Prairie, the Wright brothers experimented with several wing angles – the dihedral principle – and with equilibrium and stability. These technical problems were not solved until the end of September 1905, after their flights became longer in duration. Kelly explains how the Wright brothers found ways to control wind with “wings capable of being warped, and by supplementary adjustable surfaces in the shape of rudders.”

How We Invented the Airplane chronicles how the Wright brothers designed their aircrafts and tested their ideas about flight. The Wrights were 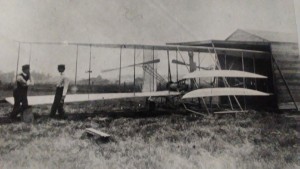 meticulous and had a keen eye for detail; they paid attention to how birds soar and their interaction with wind currents. The book makes it clear that Wilbur and Orville Wright were aware of many previous failed experiments in flight and Da Vinci’s drawings on the subject of flight. Wilbur and Orville also knew about the many scientists who worked on the problem of flight: Alexander Graham Bell, Sir George Cayley, Horatio Phillips, etc.

The Wright brothers realized that in order to turn their aircraft they needed to “warp” the wings. After a dispute with other aviation pioneers, the courts ruled that the Wright brothers had priority over the “movement” of the wings – the aileron principle. Both brothers were voracious readers. They read about aerodynamics, especially aeronautical annuals for the years 1895, 1896 and 1897.

How We Invented the Airplane enables historians and aviation enthusiasts to understand how the mechanically-gifted brothers became the first humans to fly. The aviation technology that many people take for granted today was once the stuff of healthy curiosity and inspiration. For instance, when Wilbur “shifted the upper surface backward by the manipulation of the sticks attached to flying chords, the nose of the machine turned downward as was intended.” They thought of their invention as a machine. The Wright brothers were not only pioneers of aviation and valiant test pilots; they were also engineers, machinists and inventors.

Their first motorized flying machine, the Wright Flyer I, had a wingspan of slightly over 40 feet. Because they could not find anyone to build them a motor, they built one themselves with the help of their shop mechanic. The motor had 12 horsepower and weighed 160 pounds. They also became interested in the performance of marine and screw propellers.

When the Wright brothers first flew the Wright Flyer I at Kitty Hawk, there were five men present from the Kill Devil lifesaving station. These were the first people to witnessed man fly. On December 17, 1903, they made four flights. The first covered 100 feet in 12 seconds; the second and third 175 feet, and the forth 852 feet in 59 seconds.

After their initial flights, the Wrights built a stronger and heavier new machine, the Flyer II In 1904, which was capable of generating 16 horsepower. That year they attempted or completed 105 flights. Two flights lasted over five minutes. The 1904 flying machine weighed 925 pounds and flew between 32 and 38 miles per hour.

In 1905, they made 50 flights, which culminated in a total flying time of 216 minutes. Their longest flight in 1905 at Huffman Prairie was aloft for 38 minutes and 3 seconds. The Wright brothers were now certain that they could maneuver an airplane on demand. In 1910 the Wright Model B Flyer become the first airplane to be mass produced. The explosion in aviation technology quickly followed.