‘Sub-Sahara’. Not that I normally am so interested in the air forces of African counties, but I was simply curious about these air forces of which you seldom hear, because they usually are too little and not representative. Hence these books on my book shelf!

When imagining African states I often have to think about so called ‘failing’ and ‘corrupting’ states. Look up the statistics and unfortunately it is a fact for a lot of countries. That does not automatically mean that the air forces of these countries are not interesting enough to look at closer…this besides the fact that you hope that the regimes and air forces of these countries deploy their planes in some accountable manner.

What immediately strikes is that the African countries described in these 2 volumes primarily bought or got Russian airplanes to start their air forces, apart from some exceptions. This didn’t mean that the planes were always delivered by the nowadays known USR. Countries as the Ukraine play or played a role at weapon supplies and also the French and Chinese ship their new or second hand planes to Africa. You will find numerous pictures in the books of especially older and some modern Sukhois, MIGs but also Jaguars, Strike masters and Chinese A-5C’s…flyable and in ‘written off-status’.

The books are in A4 format and printed on nice glossy paper. This makes that the books lay comfortable in the hand and are soundly presented. Most of the countless pictures are in colour but also some in black and white. The pictures are, to my opinion, essential for the transfer of the atmosphere and facts of the air forces that pass by. Nice to see that old pictures from the Cold War period are used in contrast with some more recent or more actual colour pictures. 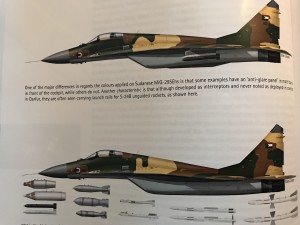 In volume 1 you will find a ‘beautiful’ story in the style of two versions witness reports of the same incident by a –at that time- co-pilot of a Botswana BAe 125-800 with on board the Botswana president and a Cuban who then worked for the air force of Angola. The BAe 125 was intercepted and bombarded – so the story tells- with rockets from Angola, first from the ground and then by a MIG21 or a MIG23 with Cuban crew that flew for the Angolan air force (Angola was communistic, that’s why). The right engine was shot off but the pilot managed to put the plane safely to the ground from FL350 (+-10km) in Cuito Bie. It was calculated that the force of the impact of the missile on the plane was 33g!The book has a very nice built up with a clear chapter and paragraph breakdown and fonts and pictures.

To me the pictures of the planes from some air forces radiate the mystery and corruption that you expect with those kind of countries. Also vague pictures of decennia ago instead of up to date ones. Just because there are no other pictures. Other air forces, like for example Chaad and Angola, were open for good photo sessions and thus there are magnificent pictures of Frogfoots. Next to good picture material there has been given a lot of attention to the background, history and facts of the air forces, therefore these books can be put straight on the shelves of security services.

What more can I say! Excellent books. And these are just 2 of a whole series.