Somewhere around my 14th birthday my dad told me that, approximately 40kms from our home in The Netherlands, there was a British Military airport on German soil, near the border; RAF Wildenrath. He better had not told me so! In about 3 years I have visited probably 40 times and that is where my love for flying, the RAF and aviation really developed. 40kms return trip on the bike, sandwiches and camera on the pannier rack. The first time that I went spotting was on the 7th of August 1985 seeing my journal (I didn’t had a pc yet in that time). That first day turned out to be a quiet day with runway 27 in use and it was the day that I became familiar with that unique Phantom sound. Great and what a power! Two years later I was welcome at the base with 3 friends after having written a neat letter. We were personally welcomed by the Squadron Commander and had tea in the bar and sat in big red leather fauteuils. A bit later we stood at a shelter watching how a Phantom was started which was about to go dog fighting with two Belgian F-16’s. We did find that absolutely wild! And how open and pleasant the British culture! Unfortunately, the film in my camera wasn’t in the right place, hence I have hardly any pictures of this memorable visit.

What is it than special that David Gledhill writes a magnificent book about the development of the aviation base, through time, with her two Phantom 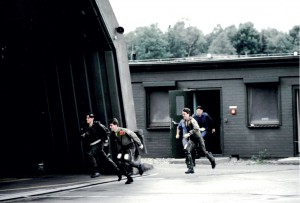 squadrons (19th and 92nd Sqn) and some Pembrokes (60th Sqn), about 32 years after my first visit. Also other planes have flown from there but that was primarily before my time.

Besides, we know David Gledhill also from other books as ‘The Phantom in focus’ and ‘Fighters over the Falklands’. See the reviews on this site. Davis was Navigator in his time at RAF Wildenrath on the Phantom.

Gledhill elaborates in his book on all the developments on the base throughout the years. From the opening till the closing of the airport; from the manner in which the operation and maintenance was done; from the practises and ‘Quick Reaction Alert’ (QRA)-flights (scrambles) till the ‘combat air patrols along the border with the East block; from the way of using the radar till the Tactical Leadership Programs (TLP) by which from other airbases tactics were practises. Of course and unfortunately also some crashes and an attack in 1989 on the Wildenrath village pass by. This last event I have missed in the time.

The book is from back till cover full with interesting details. Really too much to mention. What I did find mentionable is that those ‘nasty’ old Pembrokes (2 engine from just after the war) actually did the most interesting and secret flights: from Wildenrath till Berlin via the corridors in order to make pictures from the corridors of installations, practise areas and (fake) armament of the Russians. Also I did find it extraordinary to read that some accidents with Phantoms were caused by overhauling of the planes (too low speed and then a plane doesn’t want to fly anymore). And that just in the after days of the Phantom it was decided to give the pilot and navigator extra training in order to prevent such situations. Funny is further that the Mig 29 Fulcrum had instruments that read meters height and kilometres an hour and that they were almost totally reliable on the ground stations for aiming on the target. Flying in

On the 18th of April 1990 I came for the last time on the base. It was a day with amongst others: two Italian Star fighters. After that my spotting life reached an end… Nowadays a test circuit for trains has been built on the location of the base. I have not ever been back. Perhaps again in the future.

As I already knew from David Gledhill, he writes this book in such great detail that it stays interesting and captivating. He uses quotes and all kind of sources, among which, from colleagues, the archive of the British MOD and his own archive. The book contains a lot of good black and white and colour photos on glossy paper. David radiates with his latest book still the passion and dedication for aviation, piloting, but also for the defending of freedom as we know that in West Europe. Brilliant book…even if you have not ever been to RAF Wildenrath!