My daughter had books to read from school, so I made time to read this children book myself….

Two sisters, Maddie and Jess, play soccer on the last day of a summer soccer camp. Jess can easily shoot at goal but is totally distracted by an after burner of a 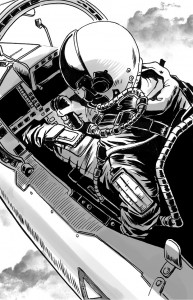 Typhoon from the base nearby that flies over. That is why she misses the ball completely and this causes irritation by Maddie because now the game cannot be won anymore. The sisters are staying, next to the base, in a big, bit spooky house that breathes history with two friends. In the house pilots used to live who, during the 1st and 2nd World War flew missions from the base. Because it is the last day of the soccer camp, the kids went, as a surprise, to the air show on the base!…. Meanwhile Jess was wondering why there were only pictures of male pilots in the house and none of female.

Jess watched shortly again to a picture of a pilot who really looked like a female and while she feels the air pressure changing, she become a bit light headed and

needs to sit for a bit. Steve, the owner of the house noticed that Jess was not feeling so well. A bit later Jess listened to the news and heard that 6 airplanes would be stationed on Cyprus for missions in North Africa to prevent innocent people to be killed… Jess wondered if one on the –male resembling- pilots perhaps was a woman…. 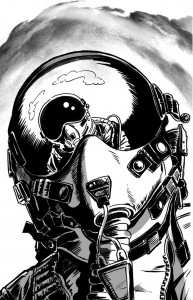 At the air show the girls stepped into a Typhoon flight simulator. Jess had a glance of recognition with the lady who checked the cards, when entering the simulator… but where did she knew her from?… And while they were waiting in line and the Typhoon flew low over again, Jess was taken by that feeling she got in the house when she looked at the picture… A bit later the two sisters sat in the simulator. Alone! After the flight was over the sisters went again..and this time the air in de simulator really felt strange…and Jess found herself and her sister back –really- flying in the front of a two seated Typhoon, with behind them a ‘real pilot’!… Totally confused about the situation. Was it fantasy? A dream? Nobody could tell.

What happened during the flight you have to read yourself. Kids in the age of – I reckon- 10-14 years- will like this story. A few storylines go parallel through the book, but they are easy to follow. When you start this book, you also want to read it in one go. ‘Super readable’ it says on the back cover of the book and that is very true. Also there are quite a few nice black and white drawings in the book, which spice up the story.

I am going to give this book to the primary school for the highest groups, I guess. Would be nice to see how this book ‘lands’ in the Netherland. Great these books of Tom Palmer!