Jeremy Harwood has made a surveyable book about the Second World War in the air. The book is divided into five chapters that tell about the 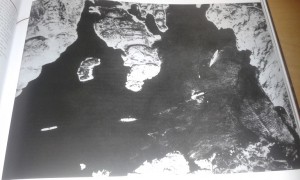 initiation of the war, the Blitzkrieg, the years after that and the end of the war. Within these chapters Harwood zooms in on the most important events that took place throughout time. To be short, when reading -and especially also when viewing- this book, you walk through the war.

The book deals with all kind of operations, ‘battles’ and attacks all around the world, varying from photo exploration missions to show the advance of the enemy or the extent of devastation, till the attack on Pearl Harbour, attacks on ships in the big ocean and on the German dams. The photos come from allied countries as well as from the axis powers. The chapters contain numerous text boxes with information about the airplanes and the technical developments. The focus of the book is the airplane as weapon and means to destroy and explore.

The book is very informative about a lot of episodes and details. For example, there is short piece of text about the German radio wave bundles, which were sent at the same time from Normandy and Calais across Great Britain to cross with each other on varies to be chosen locations. One and other can be compared with the nowadays VOR-beacons, which are still used for navigational purposes in the civil and military air force.
Airplanes could on the base of these radio waves navigate above England and choose positions for bombardments. Nice to read than that the British succeeded to secretly ‘bear them off’, so that the German bombs missed their target!  Actually, at present we still gratefully make use of a lot of techniques which in this war and other wars were developed. The war as catalyst for technological development!

I always find the air photos of the ships special again. The book contains, among others ‘the’ photo of the brand new Bismarck which was discovered on the 21st of May 1941 by the British in his hiding place in a Nordic Fjord by Bergen. The taking of this picture would be the start of the hunt and the final downfall of this ship in the Atlantic Ocean; it was brought to sink by torpedo’s of Swordfish double decker’s and a cruiser; a very sensitive loss for the Germans. Also very special is the picture of the British ships of the ‘Force Z’, which in December 1941 was brought to sink before the coast of Malakka by the Japanese. You see hits of bombs in the sea, smoking ships; you feel the distress of the ships. It must have been terrible moments for the crew.
The great thing about this book is that it offers the information in digestible chunks; the most important issues are short and effectively set out, complemented with good pictures, interesting details about airplanes, the attacks and relevant business, besides the necessary ground- and attack maps, which visualise the information even more. So, you can read the book, but also when you just like looking, you will come a great way! All pictures are black and white and partly ‘known’ pictures, but most of them I had not seen before. All of them are complemented with good informative explanations. Absolutely fun to have on your shelf with aviation books!