With this book about Howard Snyder, who during WW II was the pilot on a B-17 from the 8th American Air Force, was a card from the author Steve Snyder, son of Howard Snyder, with the words: ‘It’s our duty to remember never forget’.

This book goes further than only the events around Howard Snyder in the air war, but also describes the organisation and the people of the underground in Belgium and France, who were part of the escape route to Spain. This escape route was used by the survivors of the crash with the Susan Ruth, to stay out of the hands of the Germans, which only succeeded for a part.

The story is based on the hand written journal of Howard Snyder of which also parts are published in the book. It begins with Howard’s youth and his training as pilot 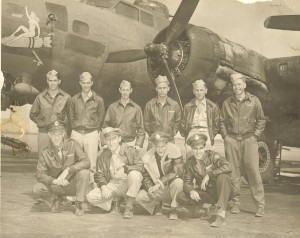 with the American Air Force. Than follows his period in Great Britain, this is where the 8th American Air Force was stationed and from which Germany was ambushed with B-17 and B-24 bombers during the day. The human side of his fellow crew members and everyone he encountered is fully highlighted, also their social activities.

For me, the best part was the section in which the training and the building up of experience is described. It took on average about two years of training before a crew member could start his war task. The different tasks of his crew members and the daily war routine are also stated. Furthermore, his experiences during the bombing flights of course are extensively mentioned, which end with the shooting down of the Susan Ruth above Belgium. We follow him and his crew, from which 2 members do not survive the crash on their underground address in Belgium and their further adventures whilst on the run for the Germans. It sometimes seems like an exciting boy’s story, but death was constantly just around the corner. The people that sheltered them were executed when caught and also the crew members were executed when exposed, as shown in this book.

The social character of Howard Snyder is seen in his personal letters to his wife and his contact with his fellow crew members during and after the war. To be short, this book thoroughly describes his adventures before and after the crash, with the help of his journal. In the end chapters the general war situation from the last two years is stated and the period after the liberation when Howard Snyder returned to his friends in Belgium, who had sheltered him.

This beautiful bound book with a golden edge on the cover (where do you see that nowadays?) is a handsome and well documented report of the air war above Germany and the events of the crew members after being shot down. It contains a lot of original black and white pictures from that period and multiple copies from his journals. A true family document with which the author honours his father but also the other heroic crew members of the Susan Ruth (the name of his wife), of which 2 members gave their life for the liberation of Europe.

Thanks to the journal of Howard, the many interviews with the underground members who helped the crew members and a lot of research, a splendid document. It’s Our Duty To Remember Never Forget. For our young generation not a redundant slogan.