This book tells about the daily life of a RAF navigator, who for the biggest part of his military career flew on the then 4 engine RAF jets like the Vickers Valiant and the Handley-Page Victor. Tony Golds – our main character- joined the RAF almost directly after his study. That was in 1960, the period of the Cold War. After his education till navigator he flew for 4 years on the Canberra, a middle class 2 engine bomber and picture viewer. This plane looks a lot like an enlarged model of the Gloster Meteor.

The crew contained of 3 persons: pilot, bomb pointer and navigator. The space for the navigator was very limited and he only had a little window with restricted vision for outside. As a VFR pilot you than do wonder how you can navigate on low heights, because not much is said about that. Probably ‘classified’! In that time one worked with systems like radio compasses, ADF and the old fashion star navigation. GPS was then an unknown phenomena.

After 4 years of service with flights around the whole world, the conversion to the much larger and faster Vickers Valiant, a 4 engine tanker especially developed for 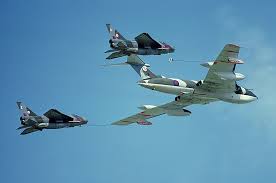 refuelling in the air of the then legendary English Electric Lightning, a 2 engine fighter for the defence of England, followed. The Valiant had a crew of 5 persons and apart from precise navigation to the refuelling location, it was also Tony’s tasks to keep track of relevant NOTAM’s, the racetrack procedures, the Airport approach and the radio frequencies. Two big bags filled with papers and flight maps was his standard luggage. During a flight, every 5 minutes the position of the plane needed to be noted down in a log-book. This was also of importance in case of a possible incident investigation afterwards. The data from the concerning flight were destroyed not till after 6 months. Can you reckon what a paper hassle that was for those daily flights!

His work did bring him across the whole world but especially also in the Far East, where England still had many Air Force bases in use by then. On these long distance hauls other Valiants, Victors or Vulcans were refuelled and flights of more than 4 hours were no exception. Tony knew how to entertain himself in between flights. The time was often that long, that he could easily engage into all his hobbies. This period is also elaborately described and I do understand now that this was a profession from which you would not quickly get a burn-out.

After the Valiant-which was phased out because of hairline cracks through overloading- Tony flew the remainder of his pilot career on the Handley-Page Victor, also a 4 engine jet. The Victor was the last tanker, especially build for this purpose, but from origin also a bomber. The later tankers at the RAF are all further developed designs of existing military and civil planes, like the Hercules, VC-10, DC-10, Boeing 707 and the Airbus.

The book also tells about his involvement with the Falkland war, where he took part in as a crew member of the Victor. The procedures of refuelling in the air are extensively set out and also the preparedness exercises of the British tanker fleet as part of the NAVO. You do need to have some flesh on your buttocks as a crew member on a RAF tanker, but that is easily compensated with the beautiful sides like the squadron life, the detachments abroad, the large amount of free time and especially a lot of piloting. Tony ended his career at the RAF after 20 years of service as Senior Squadron Operations Officer.

The book describes in a nice and detailed manner the professional life as officer at the RAF and especially as member of a tanker crew. However, you do read little about navigating itself and how the tankers and the ‘customers’ could find each other, with large speed differences, in the dark. A number of cards show the tanker measurements and holding procedures and the book contains a number of pictures from the enormous planes, which in tight formation pump the kerosene over to each other. A particular interesting part I found to read, where the descriptions of the tests with the Hercules C-130 with refuelling in the air and the risks which were taken because of the enormous speed differences.

All in all an interesting book, written in neat Oxford English, but with little technical information about navigating. You just have to trust in your own capacities and your own captain!