There was no other way it could have ended, that Friday the 13th in August 2010! After all, it was a Friday and it was the 13th. On that particular day, a C-47 was transported from the Wings of Liberation Museum in Best to Valkenburg – a former military air base in the Netherlands. The C-47 was to play an important role in the Soldier of Orange musical, but alas it was not to be. Almost within spitting distance of Valkenburg Airport, the C-47 suffered a horrific accident as the final viaduct proved to be a mere 30 cms too narrow. The result was a totally wrecked plane that was no longer of any use to the musical. The aircraft did make it to the musical’s terrain eventually, but instead of playing one of the leading roles it served as a kind of “parking guard” for visitors to the musical. The plane lay, in pieces, beside the musical’s parking lot for over 3 years.

For the writers of this book, that fatal accident with the C-47 was the starting point for a dive back into history that has produced an extraordinarily beautiful and 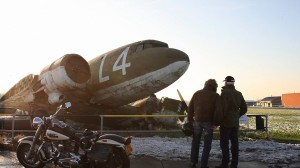 original book as well as a documentary. The 120-page book is written in English in an A4 format and brings the history of this particular aircraft back to live in a very nice way. And it is all written in the first person! … told by the old lady herself! It’s as if you are in the airplane itself and you are a part of her life.

The book consists of 13 chapters, and an epilogue, in which the C-47 tells her own history. The story starts in a Douglas factory in Oklahoma, where the aircraft was built in 1944. On April 24th, 1945 the aircraft was delivered to the USAF. Six days later, Hitler committed suicide and the war was almost over. The plane, which in the meantime had been transferred to the French Royal Air Force and was based in France, would provide a few months of service, especially transporting wounded soldiers and prisoners-of-war. A short time later, her time in the air forces was over and she was transferred into civilian hands.

The C-47 herself continues to talk, in an original manner, about her past. For a large part she was based in, or operated out of, France. Her duties consisted of carrying passengers, mail and freight, and measuring equipment that was used to map the earth’s magnetic fields. By 1978 her flying time was limited. However, while parked at Toulouse Airport, a heavy storm in 1981 destroyed her severely, bringing her flying days to an end. The Victory Memorial Museum in Arlon, Belgium took possession of the plane in 1987 and the aircraft remained there until January 30th 2002 – stuck up on a pole alongside the highway. You may well have seen her if you were on a trip from the Netherlands or Belgium to France! The aircraft lay there from 2002 to 2010 but what came next was all over the news! You wouldn’t wish that on your worst enemy… or any plane! However, parts of the plane live on in the form of tables and amazingly a DC-3 airplane simulator. The only one of its kind in the entire world!

What makes this very readable book beautiful in my eyes is the way the plane tells her own history and how the writers make use of interviews with elderly American women who built the C-47, French stewardesses who served coffee to passengers in the pioneering days, pilots who flew her and many other people who loved this plane. The book is peppered throughout with beautiful photos, including some that go back all the way to war time. The timeline in the back of the book provides a clear overview. The book exudes passion and a love for aviation and specifically for this one beautiful airplane that left the factory with registration No. 4476787. A better tribute to this airplane could not have been written. Every plane deserves such a tribute!

This beautiful book, and documentary, can be purchased via: http://www.brokendreams.eu