Station 115 is the story of an U.S.A.A.F. base in Norfolk U.K. in the second world war. Not a story about heroes in the skies but about the people that 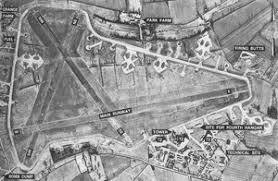 kept the planes flying and the organisation behind it running. It was a type A airfield that housed the 44th Bombardment Group flying the Liberator B-24 a heavy bomber designed to destroy the German war industry.

A type A-airfield had 3 runways with a length of 2000 and 1400 yards respectively ready to house the heaviest bombers. It was built from scratch on farm land confiscated by the Air Ministry and built within 18 months. It is interesting to learn how a military air base was run in those days and under harsh circumstances. Reading through the book there are chapters about the crew chief day, the hospital orderlies day, the navigators day, the bombardiers day and the daily life stories that all had only one goal : keep the airplanes operational and prepared for their daily attacks on Nazi Germany.

The terrible English weather especially during the winter period that changed the base in a big muddy pool asked for special improvisations. Glancing through the photos in the book from that period it was obvious that life there was harsh for ground and air crew.  All the individual stories of the people working there day and night are assembled in this book and gives you a view from the other side of the “glamour” of the air heroes.

The aftermath also gets a share in this book.  After the war it first became a transit camp for prisoners of war and after a couple of years it was turned into an active airfield but now for civilian planes. It housed besides the usual training facilities also an active taxi service flying a Piper Twin Comanche. The description of a working day of an air taxi service pilot shows that there is no glamour in a pilots working life and that this profession is only reserved for true lovers of this job.

Also stories of an air traffic controllers day, a flight instructors day and other stories about the daily activities of this field are filling the last sections of the book. In all, this book takes you through a period of more than 50 years that marks the importance of the existence of an airport during military and civilian activities in a turbulent war and post war period. It is putting again a spotlight on the people that fought under terrible conditions for our freedom and a tribute to the people that rebuilt and restored the country so we can live again under normal and happier circumstances. The author has highlighted the origination and existence of this special airfield

for apparent personal reasons and for the present users and once users it is a must to read but it is also applicable for the huge amount of airports that were built in the U.K. during the second war and of which only a few were restored and are still active. Not exiting but with a historical value especially for all those involved. Highlighted with a lot of black and white photos and containing 171 pages in a nice soft cover with 56 black-and-white photographs.