Zemke’s Wolfpack…Talking about splendid books! This is one! Compilated with lots of love by the 2 authors… The book starts with a short but powerful description with 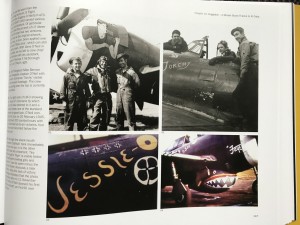 regards to them to whom this book is contributed; the people that were part of the 56th ‘Fighter group’ (FG). Beautiful and short but intense!

The 56th FG flew in WW2 with P-47 Thunderbold planes from Halesworth in South-East Britain near Lowesoft at the coast. It was one of the three fighter groups in Britain in the period of 7 December 1941 (Pearl Harbour) till the summer of 1973, together with the 4th and 78th (together with the 8th air force (Air Force)). The 56th had 3 officers and 150 men.

In December ’43 the 56th FG had 200 ‘air victories’, almost twice as much as her ‘rival’, the 4th FG. The 56th FG had 3 officers of which Hub Zemke was one and his son wrote the foreword of this book. Discipline, tactics and training were essential as well as the co-operation between all parts on the ground and in the air. 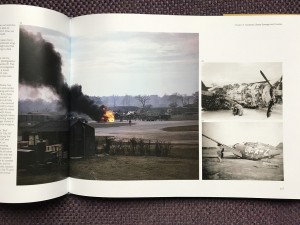 The tactic was that 1FG attacked, a 2nd FG offered support and helped to keep a possible active opponent at distance whilst the 3rd squadron – the ‘top squadron’- offered protection from above. The 8th AF became renowned because of this tactic. Next to that it were primarily the units on the ground that were responsible for the maintenance, updates and repairs which contributed to the success of this FG. It is great that the authors in this book pay a lot of attention to this ground personnel. Usually this is an under-exposed factor in a lot of aviation books.

The 56th FG claimed to have destroyed 674,5 hostile planes in the end. They made 19.391 sorties with a total of 64.302 hours operational air time. What a numbers! There were 39 so called ‘air-to-air aces’ and if you also count the planes that were destroyed on the ground, it were 60 aces, but that is not how it was calculated worldwide.

The chapters include everything that had to do with the squadron: from mission planning till armouring and from maintenance and accidents till Nose Art. They contain all 1 or 2 pages with a kind of introduction to the topic and furthermore loaded with beautiful pictures. In chapter 13 there is a great summary of all aces with picture and a list with their shot down planes.

What makes this book a brilliant reference work for each book shelf, is that all pictures (which really are a lot!) have good substantive commentary 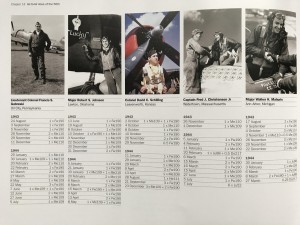 which give the pictures more interpretation. You see throughout the whole book that the compilation of it hasn’t been done in a hurry but with love from real passionate authors. Absolutely beautiful is also the attention that is given to all the other people of the 56th which have deceased and how that has happened.

These kind of books score outside the box; 6 stars out of 5! And oh yeah, just check for the sound of a P-47 YouTube..nice!