Topgun! Everyone knows Topgun as the movie Topgun from 1986 with Tom Cruise and his lovely lady. And most of the time that’s it! Topgun is the flashy name for the American Navy Fighter Weapons School, which was founded as navy pilots performed relatively poor in the Vietnam War in comparison to other wars. Nowadays, the school is called: ‘United States Navy Strike Fighter Tactics Instructor program’. Topgun is stationed at Miramar Airbase just above San Diego on the West Coast (take a look with google / maps!).

‘Topgun days’ is written by Dave Baranek (nickname ‘Bio’). Dave Baranek entered the Navy as a Radar Intercept Officer and flew many hours in particular the F-14 Tomcat and later the F-5F. He ended up with Topgun after he himself had done a training at Topgun and soon realized he wanted to be part of the teaching staff. I wouldn’t call the book a very exciting one. The book is a much more a detailed description of what Topgun was in daily practice and how the writer made a career over there. 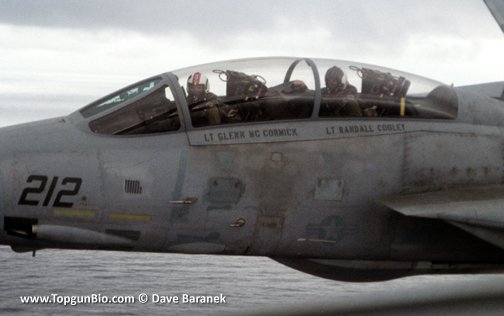 For readers who are interested in the details of what is happening in the cockpit, in the dog-fights, the way of communication in the cockpit, the way of living of a Naval Flight Officer, this is the perfect book. Dave Baranek describes in great detail how everything (and then I mean everything!) whitin Topgun works. The book is a kind of diary and is very carefully written. Dave Baranek writes relaxed, easy to read and with passion, dedication and pride but also with humility and self-criticism. For readers who want to read about great adventures, this is an inappropriate book!

He describes how he got some criticism at his trial lessons for ‘pre-board’ and then the ‘murder board’, both situations where a whole class full of officers where asking difficult questions at trial lessons from instructors. With these criticisms in his hand he managed to improve him selves and became a good instructor . Frankly, I rarely come across a book from whithin the world of flying as detailed as this one and in which the writer/ instructor describes himself with a critical look. More people should do it this way!

I found it funny to read that Topgun instructors never wear their watch or medals as they teach That would only distract. Also new for me was that in the pauses of the lessons always music is playing and that even the music selection is assessed! Great! Dave Baranek describes also -in addition to his work at Topgun- his activities from aircraft carriers and that it almost cost his life after a bail out from a Tomcat. Additionally, he recounts how he got involved extensively in filming the movie Topgun. While recording that movie there was a fatal incident when the crew of a fighter crashed into the Pacific Ocean.

The book is beautifully executed with more than 50 color photographs taken from aircraft on the ground and air-to-air. If there are people who want to have a signed version of Baraneks book, email me, I will send you the email address of the writer. You can –of course!- also go to his site; http://www.topgunbio.com . Visit http://www.youtube.com/watch?v=Gqczpm9BMvU for an impression of the activities of the Navy Fighter Squadron VF24 of Dave Baranek in 1981-82. That puts the content of the book in time. Dave Baranek scored an ‘OK 3-wire’ with this book! (means a very good landing on the deck)