Because of the treaty of Versailles the Germans were after WO I tied with hands and feet and normally there would not be the possibility for the built up of an efficient Air force. That is where this English written book start with its story. The pilot training in Germany itself started with the establishment of glider clubs and the follow up training with motor- and pilot schools in Russia and Italy. This last was obviously done in secrecy. In this way, outside the range of vision of the allied, a very efficient training course was started with as a result that when WO II broke out, more than 4000 well trained fighter pilots stood ready. Further, in this first part, the background and influence of all the people who had important positions at the built up of the Luftwaffe, are thoroughly described.

Hermann Göring, a German ace from WO I, becomes in his position as Generalfeldmarschall, head of the Ministry of Aviation and is one of the most important individuals, who was involved at the built up of the Luftwaffe, but also the cause of the final demise. The development of the jet fighters, with the most important types, the Bf-109, the FW-190 and the Bf-110 is also extensively listed, as well as the armament of these jet fighters. Quickly it becomes clear that the emphasis with the Germans is the development of jet fighters and that the strategic aspect (transport planes and bombers) is on the second place. This is also the reason why the Germans loose the authority in the air, pretty fast. These developments and the accompanying statistics have an important place in the first part of this book. For example, of the Bf-109 more than 31.000 were produced in various types. This were more samples than of any other type of jet fighter have been build.

The Germans introduced a lot of innovating modifications, for example, the FW-190 had an ‘inclined’ pilot chair, which ensured that the G-forces during the air battles could be better handled by the pilot. This is also applied at the present F-16. So, different things are very detailed described. After that, the book explains about the different fighting tactics and of course the tactical actions of the different day- and night fighters (squadrons). 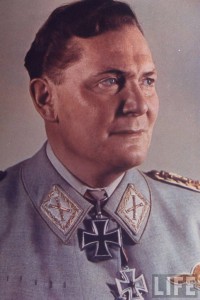 In the second part the aces are profiled. The most important and most successful pilots with their victories, their characters, their way of life and of course their decorations. It was a mutual battle who would get the most victories, which went at the cost of the protection of the bombers they had to escort. The biggest ace of the night fighters was Schnaufer, who in 164 flights took down 121 bombers. The biggest ace of the day fighters was Hartman, who shot 352 opponents in 1452 missions. To compare: the average number of missions at the allied was 300-400 and at the Germans 1200-1400. Of course you can put a lot of question marks at all these numbers, compared to the successes of the allied opponents, but they do really approach reality. The ‘why’ is explained in this book.

Finally, in the last part of the book, the actions of the first jets and rocket powered fighters are described and the demise of the Luftwaffe. The losses were shocking. Except, that only a very few aces survived the war, it also turned out that the training facilities at the Germans were insufficient and the losses could no longer be met. An example: on a random day in 1944 an allied air fleet of 900 bombers, escorted by 100 fighters, attacked Germany. The Germans lost hereby 181 planes and 109 pilots were killed and 40 wounded.

An important part in this book is set out for the number of victories and the decorations of top pilots. The knight cross with swords and diamonds was the highest attainable and meant eternal fame. It is a well-tended book with black and white photos of the pilots and a lot of performance graphics. I personally missed the photos of the different, lesser known types of fighters, which were described in this book. Once you have read this book, you can really join in on the conversation about the air war seen from the German side and you’ll understand a bit more of their effort and passion.