So, a very beautiful book this on the South Pacific Air War! It tells about a bit of war history which we know little about in the Western world (to my opinion). Nevertheless, it is my first book about being in war in those areas, specifically the surroundings of Moresby. Publisher Avonmore Books has with this second book from Michael Claringbould and Peter Ingman about the air war there, captured two crucial months that detail about the fight for the harbour of Moresby in the Coral Sea in May 1942.

The Allied have delivered there a good result defeating the Japanese which didn’t go without a battle! It was a war in which ships, but also jetfighters 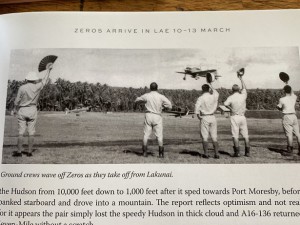 and bombers were deployed. Interesting about the book is also that Japanese sources have been researched by the authors. That gives a subtle view in the story, complemented with plenty of pictures of the Japanese and their planes. This all comes in a nice, relaxed writing style.

The book has a beautifully lay-out, and has been printed on glossy paper. The authors have used a lot of pictures to clarify the story and often also to literally give it some colour, and that shows. Multiple black and white pictures have been used of the operations on land and in the air. Also great are the animated colour pictures of various situations which give the book certainly an increase in value. 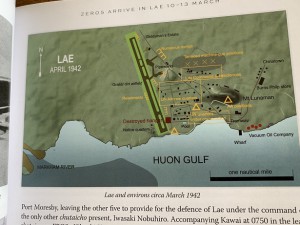 At the back of the book you will find next to an overview of used literature, also an overview of the crashed planes on both sides…53 allied and 49 Japanese have lost their lives in combination with 50 respectively 35 planes that crashed or where hit. Impressing are the number of planes in the ‘indicative’ overview of planes that from December ’41 till March ’42 arrived to take part in the battle. The authors close off with about 30 pages of colour shots of the used planes on Japanese and Allied side. You can see that the authors have given attention to the context as well as the lay-out of the book!

All in all a very beautiful book and an interesting addition to the bookshelf!.