B-52 Stratofortress: The Complete History of the World’s Longest Serving and Best Known Bomber

The Boeing B-52 Stratofortress bomber has been in service longer than any other military airplane. The B-52 was introduced in 1952, and began service in 1955. It is still a crucial part of the U.S. Air Force Strategic Air Command (SAC).

Aviation historian, Bill Yenne, has written over 36 books. B-52 Stratofortress: The complete History of the Worlds Longest Serving and Best Known Bomber is a detailed account of the legendary Boeing bomber. Yenne offers graphs and design drawings that show the various stages of development of this formidable and venerable combat aircraft. This book has been meticulously researched.

The author describes the B-52s impressive capabilities, but also its history, dating to the early years of the Cold War, the aircraft’s role in the Vietnam

War and the B-52s importance to the U.S. Air Force Strategic Air command. Yenne dedicates many pages explaining the substantial differences between the many variants of the B-52, and why these changes to the aircraft were necessary.

The evolution of strategic air defense, as opposed to tactical bombing, owes its beginning to the nuclear threat posed by the Soviet Union after World War II.

At the end of World War II, the U.S. Air Force needed long-range bombers that could penetrate deep into Soviet territory. This also meant that effective bombers had to be capable of flying at very high altitude, as Soviet surface to air missiles had vastly improved since the conclusion of World War II.

The B-52 followed the strategic role of prior long-range bombers like the B-29, the massive B-36 and B-47. Yenne’s clear writing conveys the importance of the B-52 in preventing further incursion of the Soviet Union throughout the world, especially into Western Europe, during the Cold War.

Yenne also finds a commendable balance between the vast amount of information he offers about the B-52 and the diverse historical arenas that catapulted the B-52 into aviation history.

A particularly interesting chapter entitled “War in Southeast Asia” explains Operation Linebacker II, in relation to the strategic bombing strategy of the U.S. that finally brought the war to an end. While Secretary of Defense Robert McNamara’s coy and peripheral “Sublimated War” strategy did not work, it was General Curtiss LeMay’s strategic bombing of the source of North Vietnamese military, electrical plants and petroleum reserves that proved the value of conventional wisdom in strategic bombing. 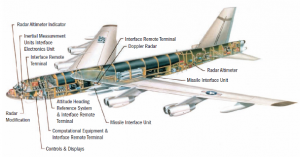 Helping to end the war in southeast Asia, the B-52 proved the effectiveness of the U.S. Strategic Triad, which was comprised of intercontinental range solid-fueled missiles and ICBMs, submarine-Launched Ballistic Missiles (SLBMs), and B-52s flying high and deep into enemy territory.

Yenne also devotes attention to the B-52s other capabilities as an aircraft that complement its role as a bomber. For instance, of interest to aviation enthusiasts is the less known fact that the B-52 is also capable of carrying reconnaissance drones, “quail” and “skybolt” missiles under its wings, in addition to experimental aircraft like the X-15, X-24 and the X-43, the latter which reached a speed of 7,307 mph at an altitude of 110,000 in 2004.