Ran Ronen (1936)  started his career in the IAF (Israeli Air Force) in the beginning of 1954. After his basic training on the Stearman and the Harvard he started his operational training on the Spitfire, which formed the backbone of the IAF together with the Mustang fighter. After that period he followed a conversion training on the Gloster Meteor and the French Mystère. In this book we follow Ran during his flying career and operational live during the 27 years he served in the IAF as a pilot.

It were adventurous years to start with the Sinaï campagne, the Sixth Day War and the Yom Kippur War and in between what Ran calls the War of 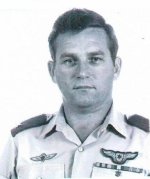 Attrition in which the countries situated around the borders of Israel tested the strength of the Israeli defence forces by repeatedly infringing the Israeli borders and visa versa.

From the beginning of his live as a jet pilot in the IAF Ran is active part of the air war between Israel and its neighbour countries and that leads to beautiful and adventurous stories full of drama and tension. After his start in an operational squadron he is soon engaged as pilot in his first air battles with Egyptian Mig 15 and 17’s and involved in ground bombardments on Egyptian ground targets during the Sinaï Campaign.

After the Sinaï Campaign he participates in a squadron exchange with the French Air Force which leads to a couple of strange situations. The first day on his arrival in Cambrai (France) started hilarious. After a plentiful lunch with wine and liquor he was informed that he was expected to make an introduction flight with the French squadron commander who had enjoyed also the same copious lunch with a lot of alcohol. Despite his tipsy condition the bad weather and the unknown neighbourhood  of the air base he survived this flight and landed safely. This and more hilarious stories of his exchange with the French are told in this part of the book.

After this period Ran returns to Israel to become a commander of a IAF flight training academy flying the Fouga Magister a French jet trainer. At that time the backbone of the IAF were the French made jets as the Mystère, the Ouragan, the Mirage and the Magister.After a year Ran returns to an operational squadron flying Mirages. In all his stories of this period the thread of a war to come is always present and all the training of the squadrons is based on a possible war with the neighbour countries Egypt and Syrië.

We follow Ran in his further career as flight leader, squadron leader and base commander with different squadrons during the Sixth Day war and the Yom Kippur war  in which Israel scarcely escapes a defeat. The different air battles during the three successive wars were also demanding fatal losses of friends and colleagues and Ran also barely escapes several times death.

He always stays active as a fighter pilot on lengthy and dangerous reconnaissance and bombardment flights and eventually ends flying de Phantom as base commander of the Tel Nof AFB one of the biggest IAF bases during the Yom Kippur war. There was intensive flying with several missions each day in which Ran also participated and hard decisions were made by him to survive that war. A big part of this period is described in this book, which was decisive for the existence of Israel. On his last day as commander of the Tel Nof AFB his farewell to the base and its soldiers, Ran was flying a solo aerobatic display over the base in a F-15 landed safely said goodbye and left the base.

After the war he started a study during 2 years at the Boston and Harvard university. In 1980 he left the IAF as brigadier general and became advisor in different governmental organisations.

At the end Ran started a project named Zahala that  guided young people in their civilian or military career to contribute in a better future of Israel. At this moment he is still involved in this organisation. This e-book shows the readers a good and realistic insight of the IAF during the different wars and especially the live and flying career of Ran Ronen during his period with the IAF. His flying stories are exciting and courageous and he describes his moments of fear and uncertainty without reservation.  A nice readable book in easy English and a must for the jet drivers amongst us. No photos or drawings but a lot of adventurous stories. Strongly recommended.