This book was published by the daughter of WW II veteran ‘Jack.’ Shortly after her father’s death, her family discovered a treasure trove of sorts containing her late father’s letters home to his parents, penned during the war. In addition, the chest contained a slew of mission notes complemented with maps that he had compiled for himself. The remarkable discovery inspired Jack’s daughter Elisabeth to share it with others interested in World War II. Thus this work has been published under her name.

Evidently, Elisabeth also possesses her father’s photo albums because included in this work are a myriad of pictures of her father, spanning the war. It is through these photographs that we are introduced to his crew. With the exception of the Diary of Anne Frank, I have never before held in my hands an account of the war transcribed in letters from someone who was actually there.

It is the story of a Missouri boy – barely a man – just out of college with a degree under his arm when he enlists with the USAAF. He is promptly 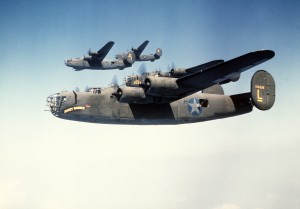 An air-to-air left side view of four B-24 Liberator aircraft in formation. The B-24 was built for World War II combat (Wikipedia)

selected for navigator training and is soon posted with the 8th AAF based in the UK. He flies the mandatory 35 missions as a member of the crew of a B-24 Liberator. His experiences are harrowing, such as the downing of the adjacent B-24 in formation by a Me 262 jet fighter which then collides with another B-24 which in turn takes out another in a chain reaction that leaves no survivors. “We got off lucky” Jack recalls as he details the day-to-day routine at the time: bombing Germany again and again. He was able to see everything so clearly because the USAAF bombed during the day whilst the RAF exclusively flew under cover of night.

From his letters it becomes clear that the fighting did not affect him emotionally at the time, despite evidence to the contrary in the retelling. He never spoke of his part in the war with his family. As such, the letters and mission notes were an eye-opening experience for them. The ‘veil of silence’ with regard to those who were not there is something I experienced with my own family as well. For those interested in the air war over Europe, the mission notes are an especially valuable source of information detailing the harsh reality of events. Such accounts would never have made it past the sensor’s pen in those days, but the notes Jack kept for himself are remarkably accurate accounts of each mission replete with the aforementioned annotated maps.

In its own way this book is a fascinating work for those interested in the air war of WW II, and Jack’s powerful, matter-of-fact writing style is highly readable.