This 282 pages counting book tells about the actions of the 8th US air force during the Second World War. The 8th contained B-17 Flying Fortress and B-24 Liberator bombers and operated from Great Britain under the command of brigadier general Ira. C. Eaker.

The book gives a detailed overview of all the operations of the 8th, which started in 1942 till the end of the Second World War alternated with eye-witness reports of the crew. Whilst reading you will actually start to understand what that young (average of 22 years) crew has endured. Especially in the first year when the escorting fighters 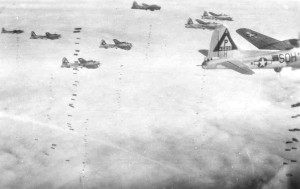 didn’t have enough reach yet to escort the bomber till deep into Germany, the loses were very high. Numbers of shot down bombers of 25 till 50 planes per day were not unusual, also because especially in the first two years the German fighters had the supremacy in the air above Germany. A lot of planes were also shot down or seriously damaged by the flak (anti-aircraft guns) that mainly around import targets very accurate and intensive was posted.

Also the personal reports of the pilots, gunners and navigators are horrible. The fear was big and death came in many forms. Being swung out of the plane without a parachute, deadly wounded by the attacks, not being able to get out of a crashed plane, crashing in sea or at the base through lack of fuel or the bad weather. Everything is described.
When you read this book you will actually start to understand how complex and heavy the air war was for the crew members in that time, also physically. Three till four flights a week, sleep deprivation because they had to wake around 3 a.m. in the night for the preparations and the stress. That all made it physically heavy. The average flight time of the bombers was 7 hours and from the moment that they crossed the Dutch coast on their way to Germany or France they were pressed by German jets and the anti-aircraft guns. Shot down or in heavy damaged planes, with deceased and wounded a board, the young crew tried to get back to their base. 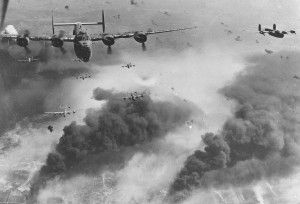 Not only the attacks of the Germans caused loses but also the collissions in the air, being hit by the bombers of different formations and the bad weather, demanded its toll. As the war proceeded the formations got bigger and more complex. Formations of 1.000 till 1.500 planes (the biggest formation contained 2034 bombers and 750 escorting fighters) daily pressed Germany and during formations of the planes after take-off, all kind of things went wrong. The groups could not find each other or had to deal with bad sight and heavy clouds, often with a fatal end.
Above the targets also things went amiss. Groups of bombers that made navigation mistakes and through that arrived too late above the target or on the wrong course, through which they were hit by bombs of other groups.
Incredible what those young men had to endure before they could return home to their home country, at least when they survived it. The loses got a bit less only in the last year because more fighters could protect the formations and also there were huge loses at the side of the German fighters.

I found it a moving book with a lot of details of the operations, but also the many personal reports are moving but exciting to read. The book also contains a number of original black and white pictures from that time. A lot of research has been done by the author and after the reading of this book, my admiration for those young crew member has only risen.