When I reviewed my first aviation book, about 4 years ago, I obviously didn’t think that finally a 100…and more reviews would be written! But they are there and we 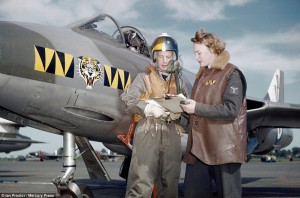 will just keep continuing! Simply because amongst the aviation books there are a lot of interesting, fascinating and beautiful pearls, which show the firmament of aviation in all her glorious aspects. ‘We’ means apart from Rene Verjans, primarily Max Heldring and Joris Gonggrijp, assisted by Debby Jenner who does the translations for the website where I have put all the reviews from our club magazine.

For the 100th review I have chosen this book that, with her amazing photos, is a tribute to the RAF-time in de cold war between 1950 and 1970 and the beauty of aviation from that time. Of course that beauty is relative given the fact that those planes must have cost a fortune of tax money and in the end didn’t fly for fun. Since it was deadly serious in that time and a bit of that feeling starts nowadays, for a little bit, to take me over, with the not symmetrical wars we at present, whether or not under the flag from the NAVO, fight against enemies, particularly in the Middle East.
The RAF has always had my special attention, because almost 30 years ago, I often stood spotting along the runway of RAF Wildenrath at Roermond, especially Phantoms. That was in the years 1985-1990 and not 1950-1970, but then still a lot of planes from earlier years were flying. The lightning’s were – in my spotting time- unfortunately just phased out and to be viewed as scrap. The Vulcans were also just taken out after they in 1982, in a rash, had been pulled from the mothballs for the Falkland war. What was still flying were Victor-tank planes, Pembrokes, Hunters, Chipmunks and more modern aircraft. 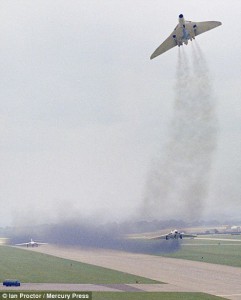 The book is a real men book in the way that it is primarily about the photos and less meant as a reading book. This book contains more than 150 splendid photos which illustrate the sphere in that time within the RAF very well, who in that time, in about every continent had multiple bases. The warfront is pictured, just like de overseas RAF, display-teams, nuclear activities, selection and training and also different aircraft. Naturally you can read the texts in the same way as you obviously only do with the interviews in the Playboy, but viewing a combination of text and picture from this book, is at least equally exciting! All the photos are provided with a short but powerful description, which give interesting (side-) information.

What I personally find very great about the photos is that de content on the photos, in a lot of cases, has been but in scene. On almost all the photos in which you

see people, the people take on a pose and it would not surprise me that a lot of photos on the ground have been taken by the same photographer: beautiful compositions, great content and that in combination with the colour(photos) from that time. In any case, the photos come from one single collection from the Ministry. Especially the fact that the photos have a format of A5 and larger, in combination with the colour scheme, I find very beautiful and contribute to the quality of this book.